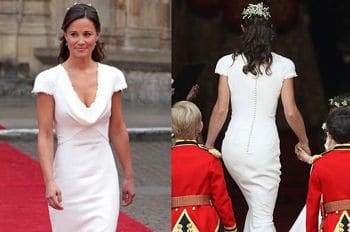 Shouldn’t you have people ogling at your butt too?

Seems the latest fixation (last year it was pec implants for the gents or was it armpit implants, hmm?) in the world of plastic surgery augmentation is having your rear end ladies approximate that of our collective royal media whore Pippa Middleton. And why not? Having fellow women grind their teeth men salivate on the streets as you pass them has always been known to be a great confidence booster…well sort of.

abc: The sister-in-law of Britain’s apparent future king is the inspiration behind the latest trend in cosmetic surgery, called the “Pippa butt lift.”

Now that plastic surgeons around the world are offering the procedure, patients are flooding in, each of them seeking the same thing: the best royal seat in the house.

Patients flooding in? Hmm, now that’s got me wondering as I do a quick twirl in front of the vanity mirror if I could use a special lift myself? But that might have to wait after I have gone and seen my beauty consultant for a complimentary waxing session. Oh dear, did I just say that? Manners indeed…

Mendieta, author of the book “The Art of Gluteal Sculping,” says 80 percent of his cosmetic work is now butt lifts, with 20 percent of those requests made specifically for achieving Middleton’s rear end.

If the 1990s was the decade of the “big booty” made popular by the curves of Jennifer Lopez, Middleton’s petite but shapely figure appears to be the inspiration for this decade’s celebrity followers.

“She’s got a nice rump that’s not too big,” Christina Valdez, a 28-year-old single mother from Miami, told “GMA.” “Her frame just looked incredible in that dress.”

Valdez was so intrigued by Middleton’s look that she too became a patient of Mendieta, requesting the “Pippa butt lift.”

Well that does it for me, no more watching my diet, running around the track and doing all those terrible lunges – I’m heading off to the doctors cause even a guy has to look cute- right?

Isn’t it time you sliced the parts off yourself you can’t stand so you can finally be the person you idealize? If only I had gone to medical school…

The Etiquette of Plastic Surgery.

Nightmare in California- Plastic Surgery changes for the worst.