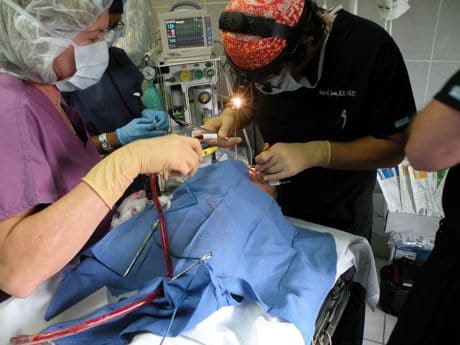 I’m sitting in a dark room, my teeth clenched as a young woman on a screen in front of me recants the time her face was obliterated by a boyfriend who went ballistic. The camera zooms in and the whole room cringes with me. The whole room except that is for the man standing there in front of her on screen doing millions of mental exercises as to how he will exactly restore the vitality and the lost confidence of this young woman. That man is Andrew Jacono, and to be blunt his existence, as probably the most preeminent plastic surgeon in the world has given many men and women the ability to once again face themselves, or to be succinct for the world to face them.

It’s an hour later and I’m now finally sitting directly across from Dr Jacono, who admittedly is very personable and affects the affinity of a dapper courtesan with a mind that is always churning. But as I am about to soon find out that should hardly surprise me, and yet it all makes sense why this man above all men was recently chosen by the Discovery Chanel to base a diabolical dramatic narrative (Facing Trauma) of a plastic surgeon who against considerable odds sets out to redeem patients who because of horrid and unfortunate life instances have disfiguring scars. Scars that most plastic surgeons would know better that they could never reverse the effects of or even attempt to bring the appearance of some semblance of normalcy. But then again, Dr Jacono, who in his own wonderful way is both beyond normal and frankly brilliant, almost maniacally brilliant in fact…

AJ: I do it because I can. I do it because I have to and I want to. Nothing in the world brings me more joy than that of a patient who looks at themselves and sees hope again. I live for that feeling. To restore them to a way of being, that allows them to function in society, to have the maladies of fate and injustice remedied, harnessed- it’s just an incredible feeling.

Scallywag: When we first met over a year ago, it was at a fundraiser for women who had experienced deprecating physical and psychological wounds at the hands of abusive partners. And I remember you talking and mentioning that when it came to dealing with these women, before you would even consider tending to them in an operating room it was incumbent that they dealt with the psychological wounds first. Why so?

AJ: In instances of domestic abuse, where studies have shown that over a lifetime 1 in every 4 women will be subjected to physical violence, what you have to realize about domestic abuse is that most women make excuses for why they receive the abuse that they do and essentially it comes down to low self esteem and many are loathe for fear of retribution to single out their partners. So what often happens, you can operate on them, and yet 6 months later, they’ll come back with a new scar. At that rate, when I get some one on one time with a woman I’m able to discover what’s really going on in her life and get them to understand nothing is going to get better until they remove themselves from that dangerous situation.