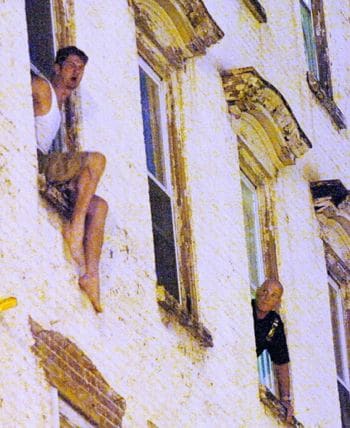 With the recent volatility in the financial markets and the drastic losses some of us have suffered financially, (which may include a lack of a job or your debts spiraling out of control) some of you might be tempted to jump out the window or at least begin to wonder about some impending doom and gloom that is suppose to swallow you up whole. That said, I’m going to be straight-forward with you, and I dearly hope you will take the time to read what I have to say, here. It’s important and it concerns you:  We, as a nation, can handle this. We’ve done it before and we can do it again, now.

I recently became friends with a very intelligent young man named Max. Max is smarter than I ever was at 24. He has a better job, better prospects, and generally has his shit together in ways I couldn’t dream of at his age. He also seems incapable of shaking the thought that his investments have been permanently ruined by the economic down-grade and the subsequent drop in the stock market.

It’s a valid fear, but it’s by no means a rational one. (Please let me explain why.)
This latest economic downturn is not the end of the world, in any way, shape or form. There’s no such thing as ‘the end of the world’. This is merely what is next.

This country, it seems, has always loved its fairy tales. Its Disney romances, its ‘Happily Ever Afters’.  Our movies mostly end on high notes—at least they did before the aughts—but this mentality that things ever actually finish is only going to get us into trouble. That’s just it: Nothing ends.  We go on. We always go on.

People are panicking. They’re worried about their investments and their futures, and they’re terrified they won’t have a future. As a direct result of listening to this fear, the stock market is falling.

But Casey, you might be thinking. You’re not an economist. You don’t know what this means.  Sure I do. It means money you weren’t spending right now anyway isn’t worth quite what you thought it was—right now. This nation is having a panic attack over its parachute mid-flight when the plane is just experiencing turbulence.

Relax. Please, take time to breathe. Meditate, if you can. This too will pass.

This nation has suffered through recession, even depression, before. We have come through stronger for it.

Take some time and think. Every year of your life has had four seasons: Winter, Spring, Summer, Fall.  The economy experiences seasonal shifts of its own. There will be Spring again. Just breathe, relax, and trust in the fact that you will get through this.  Your parents and grandparents did. You can, too.