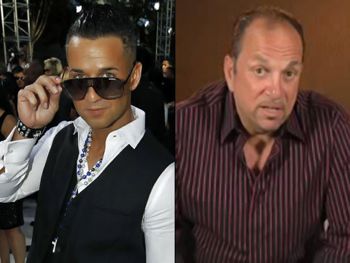 Frank Sorrentino to Mike Sorrentino: ‘You’re all for yourself.’

There is one person that won’t be partaking in a Ron-Ron juice cheers for the premier of the 4th season of the seaside sensation, Jersey Shore; The Situation’s very own father, Frank Sorrentino, who  doesn’t want anything to do with his son’s new found fame.

But don’t believe for a second that Frank hasn’t ironically, er brilliantly, learned how to turn oneself into his own version of a mediawhore via the internet.

NY Daily News: Reality star Mike (The Situation) Sorrentino may soon have one now that his dad, Frank Sorrentino, has launched TheConfrontationSite.com, where he accuses his famous son of abandoning the family after striking TV gold with “Jersey Shore.”

In an introductory video posted on the site, Frank claims his son “created more situations for me and my life than the name he gave himself.”

Frank laments that his son Mike has swindled him out of plenty of cash over the years to get himself out of his now infamous ‘situations’, but when his father asked him for money just one time, The Situation instead suggested that his father should go on welfare.

“I love my son, Mike,” Frank says. “But you know what, Mike, when you get to the top and you forget where you came from, somebody should remind you. I just want to remind you.”

He wants to remind him via the internet. For the world to see. So the tabloids start calling, and Frank starts to get hot under the collar… so that he can what? Reunite with his son? We’re sure that’s it. The videos, more than a dozen in total, trash The Situations already less than stellar reputation, and even give a shout out to Snooki, calling her a 4-foot-11 piece of, well you know.

We’re sure that jealous has nothing to do with Frank’s recent fame-seeking strategies. We’re sure it’s all for his his kid, right? In any event, this desperate duo proves, the (rotted) apple never falls far from the tree.