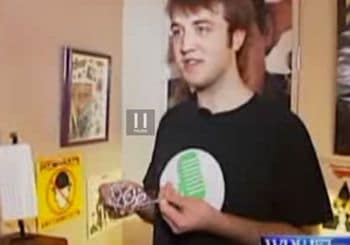 Who said a Queen can’t be a boy?

Jake Boyer today is a very happy man. Or to be correct- a very happy Queen. Confused? Put on your tiara and follow us this way…

wdbj7: BLACKSBURG, Va.— Some Blacksburg High School students had a different choice for prom queen this year: the winner was a man.

“This was as much a social experiment as it was a fun thing to do,” explained Boyer.

He’s a well-known and outgoing student at Blacksburg High School who had a big announcement this past school year.

“I came out of the closet this year, and I already knew everyone at school was incredibly open about it,” Boyer said.

And once you’ve come out of the closet, why not go all the way? Become the Queen you’ve always been inside.

“Obviously everybody was more than willing to go with an openly gay male prom queen,” he said.

“I was initially met with some skepticism and I met with them and said I want to do this.”

“They actually decided about letting Jake being prom queen two weeks before prom, but they didn’t tell anyone because they didn’t want the media showing up or anything,” explained Steele.

And if we know one thing about the media, sometimes it’s best to keep them at bay- cause all they’re going to do is openly ask is if this is something as a society we should be tolerating and don’t boys like him understand they’re ain’t room for queers like him and the like and then something about how it’s always been most women’s wet dream to be a prom queen, fall in love with the quarterback, get a job flipping burgers or if she’s lucky a diploma in hairdressing. So maybe it was a good thing the media was kept away.

Isn’t it time gentlemen you also had the courage to become whom you always knew you were on the inside? After all – the new King sometimes means being the new Queen.