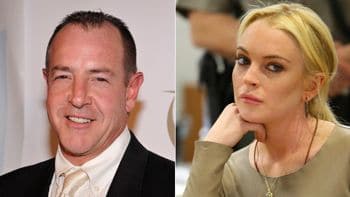 Milo’s got that sinking feeling.

It was bound to happen and now it has- Lilo will no longer go by Lilo – but just Li- short for Lindsay. Why? Because she’s just realized all her problems lie in her surname, and if she just could chomp that little inconvenient moniker off daisy petals will float onto her bed pillow. Of course, daddy is outraged and ‘hurt.’ How hurt? Let’s apply a puff of your favorite tequila down the old tonsils and find out….

nydailynews: “I’m proud of the Lohan name. It’s a name of integrity,” he says. “We all had very successful jobs on Wall Street. My father was an unbelievable provider. My sisters are pillars of the community. There’s not a blemish in my family outside of me.”

Integrity? Hmm- that sounds a bit off the mark- me and the chipmunks would have said something like this- ‘It’s a name of banality,’ or even this: ‘it’s a name of depravity’ – but that’s just us and we’re already on our third bottle of moonshine this afternoon. And the wall st part should be changed to exceptional careers as media whores. The blemish part- hmm- no where in sight, which reminds me where’s the other bottle of moonshine we normally reserve for Saturday afternoons?

But Milo isn’t just going to sit there and watch all that moonshine spill on the floor:

“At the outset, it hurts to hear something like that, but at the end of the day, it’s never going to happen,” Michael Lohan tells the Daily News. “It’s a real shame Dina would make up this kind of story.

If me and the chipmunks could offer Milo a bit of advice, it would be we think Lilo is onto a good thing, and if we were you Michael we’d chomp the Lohan bit off too. Isn’t it good to know that a bit of window dressing will forever wipe away the bitter tears sitting on that stained pillow case?

LINDSAY LOHAN DISINHERITS HER FATHER (AGAIN) AFTER HE AGREES TO STAR IN CELEBRITY REHAB.

Lindsay Lohan just wants to party all the time.