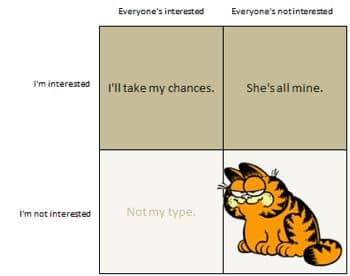 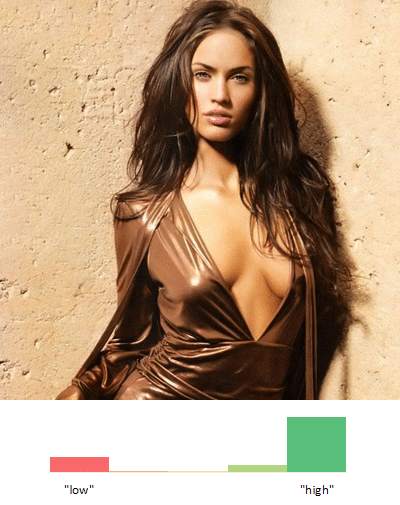 OkCupid,  Julian Assange ‘s favorite online hookup hotspot, has just finished its first mathematical analysis of female attractiveness derived from“observations and statistics from hundreds of millions of…user interactions” and posted the findings – which some have called counter-intuitive – on their blog .

The report, which offers a ‘fair warning’ at its onset that women are about to be objectified ‘big-time’ (the blogosphere’s favorite brand of fun), stated that, in very short, “the more men disagree about a woman’s looks, the more they like her.” And the more likely they are  to message her in the online dating world, researchers say, citing statistics that the number of messages a woman received on the site in question increased in direct proportion to the variation of male opinion. Ergo girls, “If someone doesn’t think you’re hot, the next best thing for them to think is that you’re ugly.” But as in most cases of outward appearances – and beauty being certainly one of these – things, I suggest, are not quite what they seem.

Christian Rudder of the Cupid crew then uses Game Theory to explain the researchers’ collective thesis, writing of women who polarized opinions on theOkCupid 1-5 ranking system:

“Suppose you’re a man who’s really into someone. If you suspect other men are uninterested, it means less competition. You therefore have an added incentive to send a message.”

“On the other hand, a woman with a preponderance of ‘4’ votes, someone conventionally cute, but not totally hot, might appear to be more in-demand than she actually is.” So, theoretically, you might not bother. “It’s the curse of being cute,” they say.

Which both supports and stands completely at odds with a not-so-secret fact embedded in the deepest competition centers of the male’s ‘reptile mind’ that this author can verify through 20some years of field research on the subject: Whenever men, particularly in a group, see a woman that they perceive many other men find attractive, some will inevitably begin to immediately, and often loudly, disqualify her in order to mask their own inadequacies; this in order to protect themselves from the embarrassing position of having their virility questioned. We could well consider this a ‘move’ and account for it in Game Theory (and I should like to add that it is probably an evolved defense mechanism).

In Game Theoretical terms, it is a better strategy for a man unsure of his prowess to slander a woman he perceives he has little to no chance with than there is to praise her, and subsequently fail at seducing her (as a side note, we would also call this a game of incomplete information). More specifically, the man our example feels there is a better chance to be positively rewarded by announcing, not so politely, his disgust with a woman he may otherwise find attractive, or even beautiful. This is especially true in a public social setting – which the internet is increasingly becoming.

To illustrate the point, take for example the words of one OkCupid commenter who used the handle ‘Jesse’:

Sometimes I give girls one star because they piss me off in some way. Matter of fact that might be the only reason I ever give a girl one star. In my experience, the more hot a woman is the less polite she is.

Is this not a way of saying that Jesse will rate a the girl 1 not because she’s un-attractive, but precisely because she’s too attractive. This means that some 1’sare really equal to 5’s if not even higher than them. The problem  thus becomes one of how we separate a ‘real’ 1, from a ‘false’ 1?

Unfortunately, such a question would be too large for this article, though perhaps the OkCupid team could further analyze what types of men voted 1 in what situations in order to create an even richer and telling analysis. More immediately concerning for our purposes and even more striking: this data suggests that at least some men predisposed to speak ill of a woman they find intimidating seem to keep up these largely social pretenses even in the privacy of their own homes.

In a social setting, to use a word popularized by high school girls, this could be called drama – theatrics. Most concerning then is that these theatrics seem not to be for the sake of any external group, but entirely for the purpose of self-delusion, and a question of – like so man things – the nature of reality as  opposed to representation. Moreover this would, in any case, hint at a slightly different kind of mathematical equation.

That is that beauty, no matter its form, has less to do with how we rate it on a scale running from ‘negative’ to ‘positive,’ and more with the total intensity of emotion aroused by the, well, object being contemplated (remember, herein women are being objectified, for the sake of science!). For online dating purposes we could perhaps better call this the total amount of titillation (TAT). Or again, total hotness, if we just drop all the Game Theory pretensions.

As far as how one would increase this, I have no more than very guarded speculations, as it appears we’ve circled back to the beginning of our examination without uncovering anything.