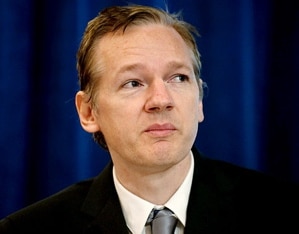 The turns and bumps are starting to get steeper.

For the latest coup also see the Mastercard hacking

From unprotected, consensual sex with fans, to giddy US politicians seeking extradition and even the death penalty and now Mr Assange even willingly turning himself to authorities to only be denied bail the stage has suddenly become set for a clash of one man’s right to reveal world communiques (despite clear laws that prohibit such actions) for the sake of liberty, clarity and democracy and that same world’s right to protect their communiques, for supposedly the very same reasons even tough for the time being what’s publicly said is at stake is the assertion that Mr Assange participated in rough sex, never mind the rough play of the same Western states that have everything to win to shutting him down…

And there is now the new twist that one of the women Mr Assange supposedly coerced has ties to anti Castro, anti Communist factions which hypothetically could have us believing like all good spy thrillers that the current case brought against him isn’t just a personal one as the authorities insist but a calculated one disguised a break in personal conduct.

news.com.au: However, there are reports that one of Mr Assange’s accuser worked with a group that has connections to the CIA.

According to US website the Raw Story, the woman may have had “ties to the US-financed anti-Castro and anti-communist groups”.

It is reported that the group is led by Carlos Alberto Montaner, who is allegedly linked to the CIA.

Then there’s report out of the NY Daily News which highlights the notion that Mr Assange has yet to pony up a purported promised $100 000 to the defense costs of one Bradley E Manning, a US Army private suspected of leaking information to Mr Assange who is set to go to trial in California. Then again as much as the timing of this report intrigues us, what can one really expect given the curious circumstances Mr Assange currently finds himself.

And then from the other ideological spectrum we have the NYT’s opining essentially punishing Mr Assange would be un American and a terrible blow to liberty and investigative journalism- something we are to believe is making those who control resources, oil fields, money, nuclear plants and the seeds of economic production violently shaking their head and insisting that having unprotected sex amounts to rape…

But the NYT’s does offer one very interesting point of view that we ought to consider:

If he had never been born, they would still eventually have to adapt to the age of transparency, to a world in which expedient lies to cover expedient collaborations with dubious regimes are a long-term threat to our national security. Sooner or later, America was bound to wake up to the implications of modern technology. Julian Assange just made it a particularly rude awakening.

In the end it’s not what necessarily happens to Mr Assange that matters, but rather the way all world governments negotiate increased transparency and a public’s increased desire and ability viz a viz the internet to demand such transparency and inclusion in those issues which they ultimately bear consequence to. It would be foolish to believe incarcerating Mr Assange will suddenly temper the public’s thirst for what actually takes place behind sealed walls…