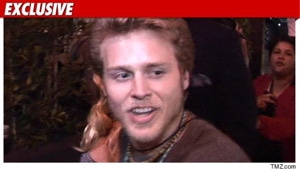 It’s been confirmed: sex tape stealing self-styled Survivorman, Spencer Pratt, was indeed arrested in Costa Rica for fire arms possession after he ‘accidentally’ brought… hunting rifles to the airport in a failed attempt to create an ‘endlessly re-tweetable’ media sensation.

The media had been almost entirely skeptical of Pratt’s alleged arrest until its recent confirmation, both for lack of G-sized breasts and the fact he’d chosen to break the juicy news directly to trash collectors  TMZ in light of a suspected borderline schizophrenic ‘missive.’

“As part of my spiritual cleansing I’ve spent the last week living alone in the jungle, reflecting on my past transgressions, and working to become a better person. I had to live off the land, and hunt to survive. As I departed the country this morning to continue my spiritual journey, I mistakenly brought my hunting weapons to the airport. It was an honest mistake, and they sent me on my way. On an unrelated note, I’m not allowed in the country anymore — but that’s because of the chicken incident.”

While many “skeptics” have “suspect[ed] that the publicity-hungry twosome [he and Double G Heidi] are toying with the press,” it has been suggested by the idle chipmunks, ‘Mazeltov,’ and ‘Fyodor’ loafing on our kitchen crumbs that Spencer, ever the savage predator, did what any resurrected spiritual traveler with a new cinnamon complexion would do when shopping atonement for his revolving media ‘transgressions’…

Which begs the question is the king of prats really so desperate for us to blog about his tiring old sex tape escapades that he’s now enlisted in constructing increasingly fantastic submissions to our collective critical authority for some free press time?

If we’ve learned anything from this perpetual parade of pseudo-celebrities it’s that Spencer’s public vision quest hallucinations are only just beginning.

Karissa Shannon on the Montag Tape

The Heidi Montag and Spencer Pratt made to order ‘sex tape’ farce is finally here.