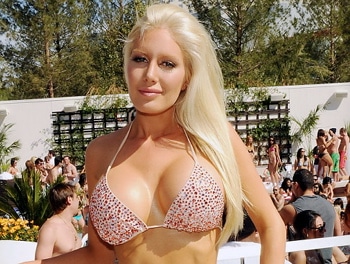 Few celebrity plastic surgery disasters press statements have seemed as meticulously conspired as the one Heidi Montag released recently. In this week’s Life & Style Magazine Heidi outlined her feelings on “downgrading and going a little smaller, to a D or a double D.” “I’m desperate to go back to normal,” she added.  Never mind the absurdity that double D constitutes a ‘normal’ breast size in her eyes, it’s the timing which is even more absurd and so lady Heidi like…

On the heels of Heidi’s preferred surgeon, Dr. Frank Ryan, having died after driving off a cliff (oh well…) and a pending multi-million dollar sex tape deal with Vivid, Heidi’s continued adventures into our collective conscious has curiously awakened us out of our dormant stupor. The trigger? Heidi’s boobs of course.

That’s right, Heidi’s about to take her ginormous breasts away from us, and with Dr. Ryan dead there’s no one left to set them right again. Which has us wondering should the box on Heidi’s pending new DVD come with the caveat – “This is your last chance to see my magnificent pair of giant, G’s, before I sadly go triple DDD!”

I, for one, am already saving up for the three easy installments of 29.95 and the requisite Flesh Light. (note to Spencer: start working on a late night infomercial package deal. Maybe Mike the Situation’s brother can help you.)

Cheap tricks and perky boobs aside, is there even a point to all this on a dull summer August day? Let’s climb into Heidi brasserie straps and have a look…

The Daily Mail: ‘I feel trapped in my own body,’ Heidi says. ‘There’s just no fixing it. Dr. Ryan knows the work he did, he knows everything.’

There’s Heidi, the voice of a generation calling attention to the impossibility of our collective struggle – the process of becoming-perfection – while tugging at our heartstrings, and solemnly hoping for the return of the spectral mad doctor, the only one who knows how to fix her. Oh boy. Just wait until these celebs discover transhumanism…Folks, Heidi is right, we are collectively doomed.

The real question, as the savvier among you may have picked up on, is how long until she gets the G-sized gazongas put in again by a soon-to-be-celebrified boob slicer who strategically botches the operation so she can repeat it once again, all to more and mounting media attention? What’s more: how excruciatingly entertaining is that going to be?

Heidi’s right, she is trapped in her body. But she’ll never be able to cut her way out of it, and she’ll never stop trying it, much less enjoying it. Neither will we. We like, so totally codependent. A bit like Sid and Nancy only with more plastic surgery. Pass us the syringe now, honey.

So much for dull august days…

The Heidi Montag and Spencer Pratt made to order ‘sex tape’ farce is finally here.