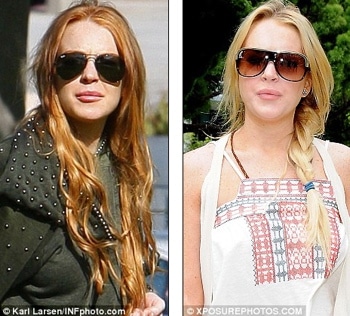 In an attempt to return to her Parent Trap era innocence, Lilo’s new publicists (aka Britney Spear’s stunt media team) have recommended she dye her hair back to its natural color: red. Aside from the absurdity of dying one’s hair from one color to another, are we to believe that Lilo is going to re convert back to a Patrician school girl we are told she once was (and what implicitly we are supposedly want to want) or rather will we all take a collective leap of faith that our favorite media whore is now a reformed pixie that simply because she stopped wearing short slutty dresses, to use a metaphor of sorts doesn’t put out on the first date anymore.

And with the star recently saying she ‘wants her career back,’ it’s maybe no surprise that she has returned to the colour which saw her become a star in films like The Parent Trap and Mean Girls.

If Britney’s people learned anything from their former pop starlet’s hair chopping incident, it’s that when attempting to announce a culture changing paradigm shift with your client’s haircut, it’s probably better to just dye it, hiding what’s beneath it, rather than re-growing it from the ground up. This applies to one’s career as well, it seems, or at least to Lindsay’s…

PopEater: The next few weeks and months are critical for the young actress as she tries to regain her standing in Hollywood. Lohan needs to shake her hardcore party image and remind people why she used to land so many solid roles in the first place. Changing her hair back to the color people associate with ‘Mean Girls’ and ‘Freaky Friday’ is a smart first move.

The supposed celebrity spectacle of the day: Lindsay dressed in a frumpy green hoodie and strolling through a park just to get some fresh air without at least a joint protruding from her pocket…? I don’t buy it. It all feels wrong, dishonest — just like that red hair with the blond rumbling beneath it.

Even if everything on the exterior looks so pleasant, we’re witnessing the same blindly blogged about and media abetted career moves as always, but with more boring situations that get news coverage because of better connected publicists.

This isn’t tabloid trash, it’s an PR campaign — what happened to the Lindsay that supposedly hit a baby stroller in her Maserati a few weeks ago, and how is this getting just as much press coverage?

If the alleged Britney Spears sexual harassment and child abuse allegations are indicative of anything it’s that Lindsay isn’t changing (at least not yet), she’s just become more conniving… and, just as with the dye job, it’s only a matter of time before her real roots start showing.