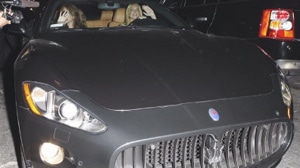 Out of all the things our dearest Lilo still needs to learn; driving should be at the top of the list.

Obviously she is a busy girl since leaving rehab the loony bin, because her schedule simply does not allow time to stop in the event that she hits a baby with her Maserati, well, almost.

According to an eyewitness:

RadarOnline: “There was a woman pushing a kid in the stroller, maybe a two or three-year-old, crossing the street,” freelance paparazzo Brayan Jaime told Radar. “Lindsay took the red light and hit the stroller. It wasn’t super hard, but she made impact and hit them. Lindsay pulled to the right, stopped for two seconds, and then just kept going.”

The paparazzo’s friend shot a video seconds after the incident, which shows the child crying, and Lindsay’s Maserati disappearing in the opposite direction. The impact of the collision was enough to knock three of the four wheels into the air, according to Jaime.

The child and her Spanish nanny seemed to be in shock after the incident, but continued along on their merry way; assuredly grateful that America’s sweetheart didn’t mow them over.

Lindsay’s response over the alleged hit and run?

“I don’t know what you’re talking about.”

Oh, Lilo. We can only hope that you were not busy searching under your leather seats for a used straw; because a Lindsay Lohan hit and run just isn’t as good if it doesn’t involve a little bit powder.