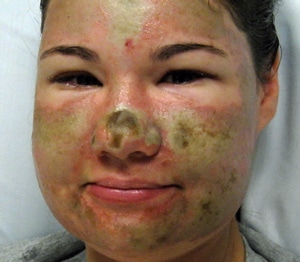 As Bethany Storro was out celebrating a new job in Vancouver, Washington earlier this week; she was savagely attacked by an unknown woman, who threw a cup of acid in Storro’s face, after asking her, “Hey pretty girl, do you want to drink this?”

If that is not horrific enough, Storro said that when the acid hit her face, she could hear her skin burning off of her face.

NY Daily News: “It was the most painful thing ever,” she said from the hospital Thursday. “My heart stopped. It ripped through my clothing the instant it touched my shirt; I could feel it burning through my second layer of skin.”

Can you even imagine? One minute you’re celebrating; the next minute you’re face is melting off as a result of a random and tragic crime.

Storro’s attacker is said to be a black women in her late 20’s.

“I have never, ever seen this girl in my entire life,” Storro said. “When I first saw her, she had this weirdness about her – like jealousy, rage.”

It’s scary how much hate a person has to have inside them to disfigure and terrorize someone that they don’t even know.

Storro, who has a hearing impairment from two bouts of spinal meningitis as a child, is just happy to have her sight. A pair of sunglasses she had purchased as a gift for herself in celebration of her new job saved her eyes from the acid which would have left her totally blind.

Calling still having her sight a miracle; Storro only question is why she was targeted. Questioning, “Did my attacker wake up in the morning and say I’m going to “carry some acid in a cup and throw it on the first person I see?”

Whatever the reason, we can only hope, Storro’s assailant will be found and arrested to prevent this obviously crazed woman from harming anyone else. One random attack of this magnitude is one atrocity too many.