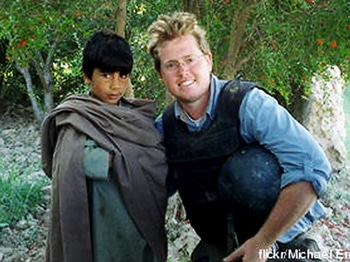 What would you expect from a promising film student, bravely documenting, first hand, the terror in Afghanistan, filming from the front lines of war for his senior thesis, and then going back to school to finish his senior year at the School of Visual Arts in Manhattan?

Most of us would believe he’d be making plans for exciting post-graduate endeavors; starting to looking for a job, maybe go back to school; but not Michael Enright, 21, from Brewster, NY. Enright took a much more horrifying route; slashing a New York City cabbie for being Muslim.

NY Daily News: “He’s a great guy – he’s always been a great guy,” said Chris Capelluto, 21, a friend and classmate of Enright’s at the School of Visual Arts in Manhattan.

Capelluto and other friends said they never heard Enright talk badly about Muslims.

“All I’ve ever heard is that he wants things to get better for everyone,” Capelluto said.

Doesn’t always seem like it’s the ones we don’t expect? The “good” kids, that make the biggest and most savage faux pas during their college years, just look at the recently deceased Craigslist Killer, Phillip Markoff, another kid, who seemingly had it all together; a person that no one ever thought would become a predator.

Interestingly enough, Enright also did volunteer work for Intersections International, a group that promotes peace and tolerance. But the intolerance for Muslims, may have been a tragic result of the war torn country he say from a bird’s eye view. His friends did say that although Enright never disparaged Muslims, he was different when he returned.

What is most tragic in this situation is how quickly we seem to forget that we can’t solve violence with violence. Enright was obviously angry, angry to the point of nearly killing a man, over the traumatic events he saw as a result of war.

He ruined a bright future, holding endless possibilities, for his cause; and I’m sure he didn’t even think, as he assaulted the cab driver, that he, himself, had become a terrorist; further facilitating the hate and intolerance that he had once fought against.

What a tragic ending to a promising journey.