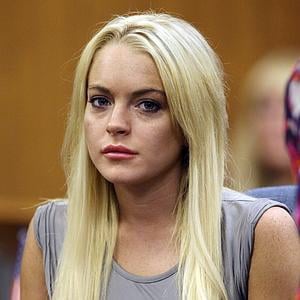 I’ll believe it when I see it.

Only two days out of purgatory and our collective princess has $150 000 pay pal stubs knocking on her LAX door courtesy of desperate clubs hoping that now she is out of the sin bin she’ll resume her old merry ways. Of course, Lilo ain’t budging because the little munchkins in her kitchen closet, Gonorrhea and Headbut are begging her to stay home and resort to actually getting her life together. Confused? So are we…The NY Gutter Post explains…

NY Post Linsay Lohan is ready to undergo a Britney Spears-style life transformation to get her career back on track.

The troubled starlet has handed the reins of her messy finances to Lou Taylor, the savvy, no-nonsense Nashville businesswoman who guided Spears back from the brink. Spears’ manager, Larry Rudolph, is also believed to be interested in getting involved in Lohan’s music career.

Who would have thought someone as fantastically diabolical as Britney Spearhead could be a positive inspiration to another human being, especially our favorite little number wiping the grime underneath under her bra straps- Lilo. But then again even Lilo is capable of redemption and telling the crack dealer that she’s not home today.

Lohan is currently lying low at home in LA, where just two days out of rehab, she’s already turning down offers of up to $150,000 to host parties at clubs and casinos.

One day when Lilo walks up to the lantern to accept her academy award for best performing human being she will stutter, stammer, giggle and let the tears violently drop. In her pockets her little angels Gonorrhea and Headbut will also weep and maybe the world too.

Lilo, we love you truly, but we’ll believe it when we see it gal. Good luck to you…