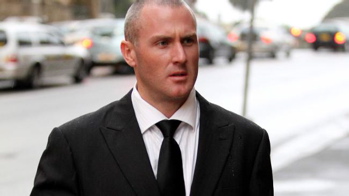 Is it a good idea to use your penis to open beer bottles?

Here comes a live one… Recently sacked Aussie police officer currently on tour in NYC with his ‘special cabaret’ routine (more on that below) wants his job back. Why was he fired in the first place? The Daily Telegraph offers some clues…

The Daily Telegraph. A FORMER police officer who thinks his party trick of using his private parts as a bottle opener is not indecent or offensive is trying to have his sacking overturned.

Married father Andrew Lawrance went before the Industrial Relations Commission yesterday to ask for a review of the order by Police Commissioner Andrew Scipione to sack him as a sergeant with Grafton police last December.

The “party trick”, as it was described to Justice Michael Walton, was a maneouvre in which Mr Lawrance used his pierced penis to open beer bottles at a Yamba restaurant on December 11, 2008.

Which raises an even bigger question, what would the police force look like if its candidates were allowed to partake in their extra curricular past times when off the clock and what type of message would that be sending to other inspired police officers who had their own special brand of performance gadgets, pierced penises notwithstanding?

Of course Gawker(who seem to specialize in the sleaze department) are offering this point of view courtesy of fellow Aussie David Foster, the NY producer of Puppetry of the Penis:

“I hope he seriously considers our offer. As a fellow Australian, I think it’s a disgrace we treat our burgeoning genital artists like common criminals. For his ingenuity, this man deserves a promotion, not a pink slip!”

Which has us terribly relieved that worst case scenario Andrew Lawrance will still be able to make a living with or without his pecker.