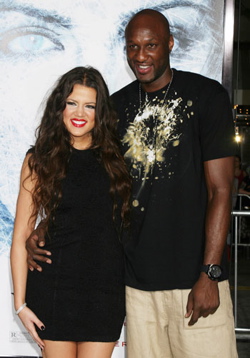 Was it not just a few weeks ago when I reported that the biggest fame whore of a mother Kris
Jenner was pressing her daughter Khloe Kardashian to get knocked up by husband and LA Laker Lamar Odom? And now rumors are swirling that the 25 year-old is in her first trimester.

A source and friend of the family told Radar:

“Khloe was inspired by Kourtney having a baby. Lamar is happy and ecstatic about having a baby with Khloe. Khloe is having cravings of fruit and ice cream. They’re really happy, but Lamar is a little weary of exposing his baby on TV. He already doesn’t like his life being played out for everyone to see eight months of the year.”

Umm, Lamar doesn’t like his life exposed on television? I know you can’t be that stupid Lamar. Don’t you know that you married one of the biggest media whores east of Malibu beach?! Don’t even waste your time complaining because whether your marriage lasts or not, bit*h is getting some of your millions.

When will you men learn that the Kardashian sisters are out for your money and any publicity they can get their re structured nostrils on?

Come on, why else would Khloe marry a man that already has three kids and a baby momma? She didn’t love him, she just wanted more publicity than her sisters. But then again what do I really know what goes on in those tinsel tainted brains off Malibu beach ..?

Our sources reveal a cautious Khloe wants to keep the announcement secret until it could be announced on the show — and until she passed through the vital first trimester.

Secret? Please even Khloe’s un born baby is looking for a press agent. Hopefully it wont use Lamar’s…