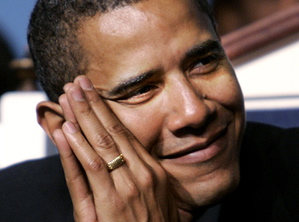 I don’t care what you say, President Barack Obama is no different from Bush or any other idiot that somehow made it into the White House. He promotes making change but the only change he’s made is going from a senator that not very many people paid attention to, to the United States head honcho that apparently will do anything to save his own ass.
Case in point, this debacle between Barack and Reverend Jeremiah Wright, also known as the president’s ex-pastor and friend who stirred quite a bit of controversy after YouTube videos hit the web of the pastor proclaiming that the U.S. government could plant AIDS in the black community and his respect for the very controversial Nation of Islam leader Louis Farrakhan. Once people found out Obama attended Wright’s church and shared the same viewpoints, his popularity quickly started to decrease.
Well two years later, after being ignored by Obama for too damn long, Wright has decided to take matters into his own hands and put Barack on blast for being the opportunist that he is.
In a letter acquired by the Associated Press, Mr. Wright was quoted saying that he felt Barack “threw him under the bus,” once he realized he pushed him away for the sake of winning the presidency although he secretly agreed with Wright‘s opinions. Obama is no idiot, he knew that he couldn’t be associated with the enemy while competing, so he slowly released himself from their friendship.
Wright also said:

Don’t worry Rev. Wright, because Barack hasn’t only thrown you under the bus, he’s also thrown 50,000+ marines he sent to Afghanistan under the bus, considering that while running for president he promised to take marines out and not bring more in. I’m sad to have to admit this to you all, but Obama is really no different from Bush; other than he talks a better game.

Now of course Obama has not and will not comment on the shenanigans he calls reverend Jeremiah Wright. He’s going to continue lounging in his chair laughing all the way from The White House. Barack “the opportunist” Obama.
Source: MSNBC
Porsche Simpson
Single Girl in San Diego:
http://www.singlegirlinsandiego.com
SHARE
Facebook
Twitter