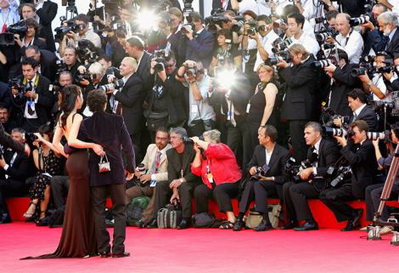 stances are a substantial departure from those tried-and-true stylings of, say, the late lamented  blue-blood socialite Brooke Astor. Some say that the look, coupled with her friendliness with photographers, goes too far, prompting one reader of the party website Guest of a Guest to snark that Ms. Snowdon-Jones “loves sticking things in her mouth.”

“I’m not a posey Muppet!” protests  Emma. “I do have a sense of humor about it. There are pictures where you wake up the next morning and you see them and you just cringe, but that’s the fun of it, too.”

Billy Farrell doesn’t quite see why all the fuss over photographs. “Sometimes I’ll just [take a photo] to get it over with. Then [the socialite] can be relieved of whatever it is that makes her feel like she has to be photographed, and I can go on.” However, Internet personality Julia Allison understands the desire that drives otherwise respectable women. Recognition can be parlayed into fame – or even a reality show. “If what you want to do is be the next Olivia Palermo (a perennial PMc favorite and star of The City) – and I mean that in a nice way,” she remarks, “you need Patrick, you need the party photographers.” Julia also notes that “Olivia might as well pay Patrick a commission for that TV show. He has that power.”

Don’t want a reality show? How about a relationship? In a starkly business-like way, Dana Vachon,Mergers and Acquisitions author of explains, “ . . . having your picture taken is the most basic form of advertising. If you’re a woman looking for a highly competitive mate, you need to bring mass media to bear on your behalf. Having sex with a photographer is a conduit to sex of a more advantageous sort.”

Social observers have come to cynically joke about the frequency with which socialites are willing to service party photographers. “Now that the social photographers are confusing the socialites [and luring them] into bed with the shiny cameras, bright flashes and the promise of free publicity, us boy toys are nearly out of business. We have to date civilians,” a male socialite laughingly admits.

PMc photographer Clint Spaulding admits that socialite sex is an occasional job perk. However, he hastens to add, “There are definitely people who are dead serious about this [getting their picture taken]. . . but everywhere you go people are drinking and socializing. It might happen to anyone.” That said, waiters passing canapes at fancy soirees don’t seem to tell the same stories. Perhaps the promise of two to three inches of celluloid fame proves a greater lure than leftover spring rolls.

Admittedly party photographers do tend to be some of the more attractive men at a given event – and if it’s a fashion party, they can also be the only heterosexual ones. It’s hardly unthinkable that socialites would sleep with photographers just because they want to. However, when sources report that these rendezvous’ happen in “coat closets and bathrooms at parties” rather than at someone’s apartment (or at least, in a taxi on the way to someone’s apartment) it does seem as though the socialites in question aren’t willing to bring their conquests home to meet their doormen.

Socialites sleeping with photographers for the publicity is now a practice treated by a jaded set, not with horror or shock but with casual derision. “Fucking a photographer to get into Pat’s site is a lot like fucking a librarian to get into a card catalogue filled with thousands of other entries. While not unethical, it’s a little ill advised,” says one girl about town.

Perhaps that socialite simply isn’t looking to land a TV show or marry up.