Dietch is now a public figure. He is the new director of one of the most important museums in the world.  Public trust is a key factor to having this kind of job.  One expects the director to be honest, to have integrity, and to be able to properly credit an artist work you have been around for 25 years.

I did not want this fight with Dietch.  So I made an appointment and went over and talked to him in person. He was not having it.  Then, because this is such a typical inner city story, I tried to explain to Jeffery Deitch how this identity theft and loss of credit, has caused LA II to suffer from depression and how at times he is anger about being cut out of art history and eventually got involved in drugs. He was caught making a drug sale and went to jail.  When he got out he cleaned up his life and married an older woman.  This older lady has a son by the name of Luis Rosado, AKA, Blueboy, which is now LA II’s stepson. And this is why, in the end, a story about the tragic life of two Lower East Side Puerto Rican kids. In the early 80’s both are in their early teenagers, both born and raised on the Lower East Side.

One LA II, as an early teenager, gets asked to be the partner of an unknown artist by the name of Keith Haring.  Keith is a graphic artist.   LA II is a graffiti artist.  Like Braque and Picasso, working in tandem, invent Cubism, between KH and LA, the two of them working together develop the style that right from KH’s first show gets branded and sold as the Keith Haring style.  This combined style is loved and adored by the critics, the press, and the public.1  The KH & LA collaboration sculptures in the first show are known as KH works of art– for example: the Statue of Liberty, the Little Mermaid on a rock, soon to be followed by the Head of David, the King Tut sarcophagus, the vases, etc. which, are now appreciated and thought of as pivital to his career and some of KH’s most important early work.

Angel Ortiz ends up cheated by some as some of the respectable and promenade members of the cultural world. 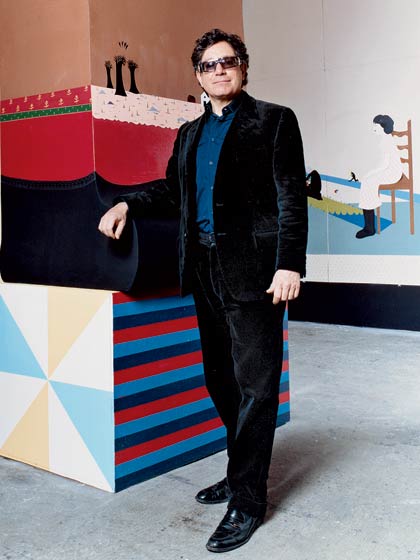 Luis Rosado, AKA Blueboy, also in his early teens, around the time Angel Ortiz hooks up with Keith Haring, kills a neighborhood youth and gets sentenced to life in jail.  Over the years in prison, Blueboy makes a reputation as being one of the most dangerous prisoners in the NY State prison system.  He decides that he wants to be a leader of the gang the CRIPS, so he gives himself a high-ranking title. Luis Rosado, AKA, Blueboy becomes infamous for killing Larry Davis.  Larry Davis, in 1988, working with his prominent lawyers, William Kunstler and Lynn Stewart (convicted and jailed, for helping the WTC terrorist Omar, Abdel Rahman, the Egyptian Blind Cleric) beat the Bronx court system, even though he shot 6 NYC police- the Bronx jury was convinced the cops were corrupt, and Davis won his case.  Larry Davis eventually went to jail for a later murder. Angel Ortiz, still struggling and is now Luis Rosado’s stepfather.

To me, as a Lower East Side resident, this is all just one big interlocking neighborhood story.  In the same way it would be national news if LA II married Nancy Reagan. When I was explaining this intriguing and complicated history to Deitch, he got extremely agitated and started yelling that I was threatening him. I felt he should know some of LA II’s background.  I was not threatening him.  Where is the threat?  Blueboy is locked away in solitary confinement for 10 years.  Dietch is moving across the country to LA and as THE Director of one of the most museums in the world, Obama himself will be lucky if he can get in to see him.

I think Jeffery Diech was yelling as an excuse to stop hearng about how 2 inner city kids each got their own tragic fame.  One by murder, the other by being robbed.  In so many ways this is really just another tragic ghetto story.  Certainly it is worthy of a book or a movie.  And how can something so obvious as collaboration between 2 artists not be recognized by the world’s leading experts?  What happened to Angel Ortiz is also a joke on the art viewing public.  A sick joke I might add.