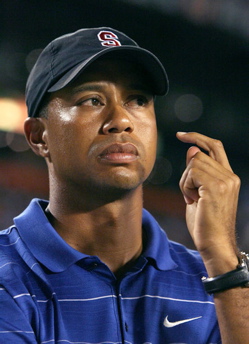 When a sporting hero has to face up to the fact that he has failed America.

There is one thing that you can not do if you are a national icon (especially one that gets paid more off the golf course than on the golf course) – that is you can not disappoint your believers and have them ever think for a moment that you are mortal and prone to behaving like them. You are nothing like them, and for all the money and press they receive they are widely expected to follow this ritual until their death or until they get caught with their pants down, which is exactly what has happened to our tarnished hero who has offended 12 year old boys and grown men alike. Alas.

That said recognizing that he is no longer worth being spat at (never mind the lost endorsements) our hero Tiger is marching up to the plate this Friday and in front of a deeply betrayed America will announce a 5 point plan as to how to treat his rapacious sexual appetite and why screwing floozies like Rachel Uchitel, Jaimee Grubbs, Jamie Jungers, Cori Rist, Holly Sampson, Joslyn James, etc…etc…behind our backs (never mind his wife’s) is a lose lose situation even while at the time it looked like a win win situation.

In any event Tiger will be speaking to a small group of friends, colleagues and close associates at 11:00 a.m. EST on Friday at the TPC Sawgrass Clubhouse in Ponte Vedra Beach, Fla. Tiger plans to discuss his past and his future, and he plans to apologize for his behavior.

We hope Tiger cries deeply, shakes his head a countless number of times before crying deeply into the bosoms of every 12 year old boy and aging male offended by his insensitivity to their desire for the demi god Tiger once was. Oh well, perhaps life goes on even if it appears we will collectively be deeply humbled for some time yet to come.