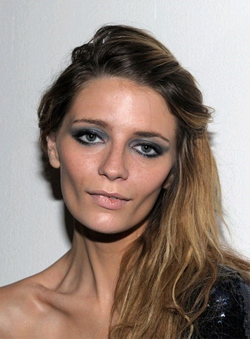 Mischa Barton is about to wrap filming for her guest spot on Law & Order Special Victims Unit, in which she plays a prostitute with a mysterious connection to one of the detectives. She’s been photographed around town wearing a leopard print coat and brightly colored tights. This has drawn a lot of attention to Mischa Barton’s off-set wardrobe and bloggers have been making comparisons left and right. Perez Hilton wrote, “We could have sworn we’ve seen her wearing similar clothes like that before.” Dana of “Dana’s Dirt” wonders whether Barton is playing, “a hooker or a starlet.”

Is this news? Are we surprised that the starlets we love to ogle dress like prostitutes? Have we been turning blind eyes as we see these girls stumble out of clubs wearing little more than a long t-shirt and tights? Just because Barton happened to come across a costume mistress that noticed the similarity between celebriteen and hooker does not mean we should mock Mischa. This lampooning of the girl and her wardrobe is just a symptom of a larger cultural illness.

How is she supposed to dress? Women are expected to flaunt their bodies, to prove that they are worthy of our nation’s attention. When they fail to adequately arouse us, we declare their outfits dowdy. Barton has been criticized for being too thin, too fat, too drunk and too desperate.

Mischa is one in a string of starlets that have fallen from grace in the public eye. Her ill fated show, “The Beautiful Life” was panned by critics and only lasted several episodes. We have watched her go from the slender girl on a hit TV show to desperate party girl, trying to revive her career without any leads. She was a child actor, and has nowhere to go; she can’t leave the industry. We made this girl: we showed her how to pout her lips, told her what to wear and threw her into a pit of debauchery and when she got stuck there, we pointed and laughed.

What can Barton do, at this point in her career? Partying validates her, and it is the only way she knows how to feel desired. She needs years of therapy, but in order for us to accept her career revival she will need to make years of progress in months. She will need to stop drinking, which is probably a crucial part of her social life and mental well-being. She will need to take on projects that don’t rely on her looks, which is the only thing she feels makes her stand out.

Barton is one of many: we love our troubled, drunken messes, so long as they’re attractive. And Barton still is, even if she’s wearing the clothes of a hooker.

Micha Barton gets her very own bar brawl.