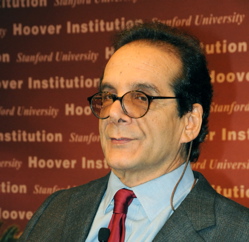 Human failures that keep us wondering.

One of the most delightful and potentially game-changing aspects of the information age is our vastly enhanced ability to discover past predictions that might otherwise have been forgotten; twenty years ago, one could have written some foolish conjecture concerning the future in The Washington Post, say, and it would be unlikely that anyone would remember at such point as this conjecture is proven wrong – although the writer himself would be likely to trumpet this if he happens to get it right. With the world’s content now largely searchable, it takes only a few moments to track down such failures – and in doing so, to determine whose opinions about the near future are useful and whose are leading us astray. This is a fine thing for us to do as a society if we wish to ensure that, say, our most widely-read commentators are worth being widely-read or even narrowly-read.

The publication Foreign Policy recently released its list of what it deems to be the worst predictions of the sort that have been proven wrong in 2009 – which is to say, predictions that were either made long ago in reference to 2009 or those that were made in 2009 itself but which have already been overtaken by events.

Chris Wallace: Best guess: Will the president end up giving McChrystal the troops he wants, or will he change the war strategy?

Charles Krauthammer: I think he doesn’t and McChrystal resigns.

In fact, Obama did and McChrystal didn’t.

I have had occasion recently to analyze the bulk of Krauthammer’s output, as my just-finished second book deals largely with the failures of our republic’s most widely-read and inexplicably-respected newspaper columnists to be of any use whatsoever in terms of providing the voting public with real insight into our national undertakings. Krauthammer, it turns out, is among the worst of his colleagues in this regard, having been wrong about every significant foreign policy and military question of the past decade. He claimed our Kosovo intervention would result in a “quagmire” for the U.S. and its allies and a wider regional war for the Balkans; it resulted in no such thing. When ethnic Albanian rebels operating out of Macedonia began stirring up trouble in 2001, he announced himself vindicated, alerting his readers that the chaos was about to begin; the insurrection killed a few dozen people and then ended within a few months. Afghanistan was “an astonishing success” and Karzai was a “deeply respected democrat;” obviously the situation has since deteriorated dramatically and Karzai won the last election through fraud. I wouldn’t even know where to begin with the fellow’s utterances on Iraq, but suffice to say that, in addition to the common intelligence failures that we see from conservative pundits from 2003 to the present, Krauthammer initially predicted that the surge would be a failure before eventually deeming it a success and criticizing those who predicted that it would be a failure. He was also keen on Rumsfeld for longer than almost anyone else of whom I’m aware – which is to say that he was even wronger than William Kristol, who is himself so perpetually and hilariously wrong that it is no longer in fashion to even make fun of the fellow and I am thus reluctant to even mention his name.

This is just a small sampling of Krauthammer’s ridiculousness, which extends from incompetence into hypocrisy as well as a total absence of self-awareness. A few weeks back, on the occasion of the fellow’s 25th year as a columnist, our subject takes some time to engage in what passes for self-reflection among mainstream pundits of our troubled era:

Longevity for a columnist is a simple proposition: Once you start, you don’t stop. You do it until you die or can no longer put a sentence together.

I was amazed to come upon this entirely correct assertion, not simply because it is entirely correct but because I have been trying to make the very same point for a year now, having based my upcoming book on the observation that once a pundit is made, he is rarely unmade. But in making that point, my purpose was to convey that the longevity of the American columnist is a problem that leaves many of our countrymen perpetually misinformed on matters of life and death and that perhaps this is something that ought to concern us if we prefer life to death, which I suppose we do; Krauthammer, on the other hand, seems to think that the longevity of the American columnist is an amusing quirk to be observed in passing, its actual consequences to be ignored. He would presumably not think this about any other crucial occupation in which those charged with great responsibilities are so unaccountable in terms of their results that not even a series of great disasters will prompt such people to lose their jobs; instead of voicing a concern that perhaps he himself has no good reason to be as respected as he’s come to be, Krauthammer follows up his observation regarding his own de facto tenure with the following quip:

It has always been my intention to die at my desk, although my most cherished ambition is to outlive the estate tax.

Let us get the estate tax repealed, then, so that Krauthammer can fulfill his most cherished ambition as quickly as possible and then die happily; perhaps he can be subsequently replaced with someone whose most cherished ambition is to actually assist the citizenry in coming to correct conclusions instead of incorrect ones that lead to the unnecessary deaths of a hundred thousand people. Besides, it would be a shameful thing if some large portion of the money Krauthammer has made in the course of his failures were to eventually go to offsetting the trillion dollars that have thus far been spent on the war he demanded in the very columns from which his money largely derives.

Wow, I just cut my finger on my own over-the-top sarcasm. I didn’t know you could do that.

To be doing every day what you enjoy doing is rare. Rarer still is to be doing what you were meant to do, particularly if you got there by sheer serendipity. Until near 30, I’d fully expected to spend my life as a doctor. My present life was never planned or even imagined. An intern at The New Republic once asked me how to become a nationally syndicated columnist. “Well,” I replied, “first you go to medical school. …”

… and then a bunch of other people go to Iraq. Sheer serendipity!