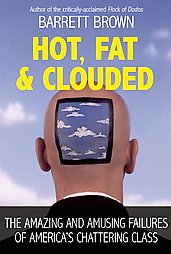 My second book, Hot, Fat, and Clouded: The Amazing and Amusing Failures of  America’s Chattering Class, is finally finished as of this morning; it will be released, I believe, in April, and is now available for pre-order from Amazon – or, if you feel bad about downloading all of that illegal music and thus blowing Tower’s business model, as I don’t, you can order from those poor saps.

1. My first book, Flock of Dodos: Behind Modern Creationism, Intelligent Design, and the Easter Bunny, received mostly positive reviews from members of my immediate family. It was also praised quite unrealistically by Harvard Law School mainstay and all-around nice fellow Alan Dershowitz as “being in the great tradition of debunkers with a sense of humor, from Thomas Paine to Mark Twain,” which is really a bit much. Anyway, if you’ve got a book coming out and you’re in need of a dust jacket blurb, go with Dershowitz. Same goes for if you happen to murder your ex-wife.

2. Dodos was so well-liked among everyone who was not actually attacked within the book that even reviews given from the pulpit were somewhat positive, especially considering all of the blasphemy found therein; English vicar fellow Lindon J. Eaves characterized it as both “annoying” and “refreshing,” which is probably the most accurate review I’ve ever received.

3. Rather than concentrating on those people whom everyone already knows to be worthless at this point, Hot, Fat, and Clouded concerns itself largely with those commentators – including a couple of Pulitzer Prize winners – who have somehow managed to maintain an aura of wisdom respectability even in the eyes of otherwise reasonable people – namely, Thomas Friedman, Charles Krauthammer, Richard Cohen, Stanley Kurtz, and Martin Peretz.

4. Just for kicks, the book also veers into attacks on such less-respectable folks as William Bennett and James Dobson. Bennett’s still brought on to such outlets as CNN to cover such occasions as the election of the first black president in the history of the United States, for instance, so at least one producer at CNN seems to think he’s respectable.

5. With Al Franken in the Senate and P.J. O’Rourke having not been funny for years, there isn’t a lot going on in the realm of book-based political humor these days. I guess you could buy some of O’Rourke’s older stuff.

6. If you are an editor or publisher with American Spectator or some other such outlet that continues to run his work, you might want to read the chapter on Robert Stacy McCain before you print any more articles to the effect that some or another of your ideological opponents is a racist based on some bit of evidence that is far more innocuous than the evidence put forth in this particular book, which itself draws from some great amount of research on the part of Charles  Johnson, Sergei Romanov, myself, and others who have been trying to trumpet the obvious for the last few months.

7. That’s it, actually. There are no other reasons to buy the book.