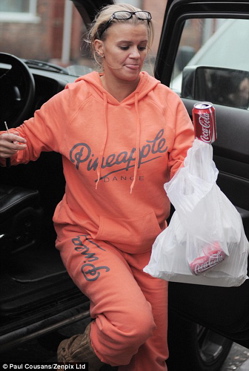 Once a rising star now a vilified horror show.

If one pays enough attention to how British and American press handle their stars one will come away with the feeling that both camps are in the business of annihilating their favorite girls if given half a chance. Of course that’s where it ends, in the US at least one is given a chance to redeem themselves if they falter or antagonize us too much, head off to therapy, weep loudly and publicly and ask for penance, not so in the UK. Once you’ve crossed the line of what’s appropriate (after all only lords, barons and the queen are real celebrity, not those TV folk who hustle for TV gigs) the press will do a stellar job of flinging you way back at the end of the ‘I want to be famous and loved’ line.

Take current used mop- Kerry Katona, a disgraced reality star who had the bad luck of getting caught doing lots of blow in front of her kids and being brandished as the devil incarnate. In her pursuit to curry public love she had gone out recently to try and lose newly found weight (yes she’s a size 14- and we all know how bad that is especially when you are a bitch magazine editor who eats real women alive…). But that of course hasn’t worked out and now the press is following every calorie intake and every drive thru fast food store visit.

The former singer had signed herself up to a ‘fat camp’ in a bid to lose the pounds she has piled on since spending thousands on weight-loss surgery.

But the mother-of-four quit the Army-style weight loss course after just three days complaining that she was hungry, cold and exhausted.

Yes- let us know that Kerry is a failure and rebound loser we should have contempt for. Continues the article written by an author who must’ve been Kerry’s high school mate at one stage and with whom there must have been a private bathroom spat…

Wearing an unflattering peach-coloured tracksuit and Ugg Cardy-style boots, the reality star nipped to the chippy yesterday in her Hummer to buy the unhealthy fast food.

Kerry had previously said she was desperate to shift some weight after creeping back up to a size 14.

Sixteen months ago the I’m A Celebrity winner had liposuction and a breast reduction but has since gone up four dress sizes.

-Kerry dear, may we suggest you move to America and re start your career, we promise to love you only as much as you love yourself and then some…