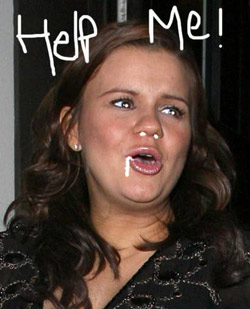 When an accountant suddenly becomes the reason why you are now poor.

There seems to be this pervasive trend amongst reality stars to be living not what one would call reality but hyper reality or even surreal lives. That said surreal reality star Kerry Katona who we featured last week after she was caught doing coke in front of her kids and consequently nationally disgraced and sacked from a variety of engagements (ironic cause such behavior would normally have you being offered other reality shows and endorsements here in the States, but we suspect the English are different…) is now deep into a personal night mare that just wont go away. That said, the newest bogeyman to enter Kerry’s nightmares comes in the form of her accountant- David McHugh.

Meeting with her accountant at his business premises, tensions escalated when Kerry suddenly realized that the reason she was now poor, bankrupt and starved off the millions that she had managed to amass a year earlier was because of her accountant, not her capricious behavior or unwise choices in her life.

That said, infuriated with the sudden knowledge and the declined invitation of her accountant to now return the money  Kerry became increasingly agitated and decided to throw office equipment around, before turning her sights on the evil bogeyman- her accountant. That’s of course when Kerry punched her accountant- bastard and ex felon (yes- what’s life without a personal accountant who is also an ex felon and fraudster? – which kind of explains why Kerry put two and two and together and started to wonder if David McHugh was now trying to play her for a fool?)

It wasn’t long before police were invited to drop by and arrest Kerry who by now was having a really bad day.

In any event Kerry who was charged for public misconduct, damage to property, physical assault and for bad nightmares was granted bail and will be appearing in court October 12 th of this year.