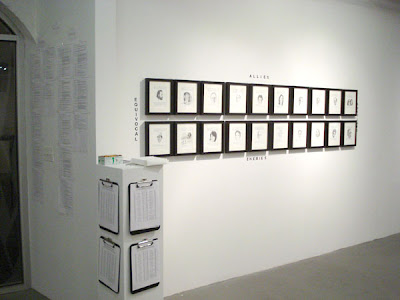 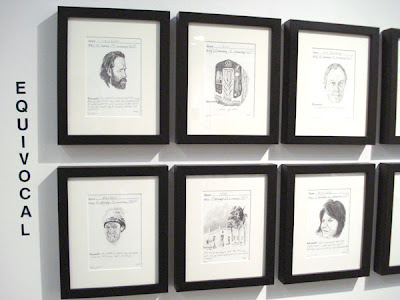 “The New York Enemy/Ally Project”, Powhida’s February 2008 installation at Schroeder Romero Gallery in Chelsea – part of their “Caucus” group show – tabulated anonymous voting both for and against various entities (from Jeffrey Deitch to the L Train) that were submitted to a website established for the project and also to a ballot box located in the gallery. This conceptual, electoral parody was co-exhibited with a “killer’s row” of framed drawings, arranged along axes of the “Equivocal” and the “Absolute”, depicting the most frequently cited luminaries accompanied by representative texts taken right from the ballots.

Powhida’s large (40 by 60 inch) “Relational Wall” watercolor, at Schroeder Romero in April 2009 and part of his one man show there, presented a loose checkerboard of portraits culled from Artforum’s “Scene and Herd” and other art social blogs, with accompanying text both real and imagined. Augmented by hundreds (thousands?) of drawn portraits lifted from the navel gazing art sites, it overwhelms us with funky “raw material” that gently mocks the seriousness of overarching art theories like Nicolas Bourriaud’s Relational Aesthetics, as well as our insatiable magpie eye for celebrity culture, our debased appetite for rumor, gossip and innuendo, and our addiction to the trashy social networking paradigms found in sites like Facebook.