Other projects/pranks by Powhida include the parody of an Art Newspaper issue that truculently proclaims: “MARKET CRASH. Collectors Abandon Miami”, illustrated with a photo of a yawningly empty art fair aisle. This was accomplished just prior to the 2008 Art Basel Miami Beach and turned out to be strangely prescient. Then, in collaboration with Jade Townsend, he envisaged Miami 2009 as an extensive Great Depression squatter camp set up in the Convention Center parking lot, complete with art dealer prostitutes and a soup kitchen line for indigent art populations, while the A-list continued to party within the building. The “recovery” has apparently not permeated all economic strata. It is a savage depiction rendered from an overhead, panopticon perspective that yields nothing in its biting social critique to Daumier and Hogarth, let alone to Jeremy Bentham’s utilitarian formulations. 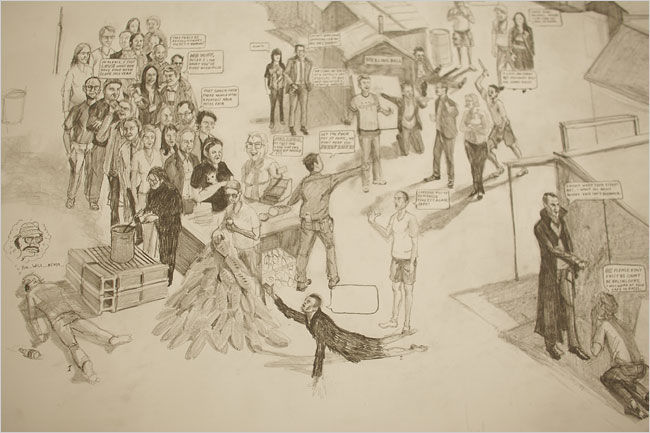 As Martin Wong was to tenement bricks and Loisaida gated storefronts, capturing their very texture, volume and palpability on canvas, so Powhida is the draftsman laureate of the torn notebook page, frequently depicting them in all their scuffed, scrunched up, disheveled and dogeared glory, sloppily taped to a wall, inscribed with scrawled lists and casual sketches, imagined even down to their horizontal ruled lines, funky, perforated holes and the half shadows they cast against the wall.