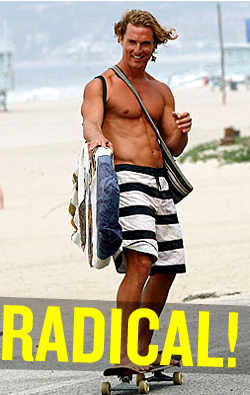 Everyone’s favorite bare-chested movie star is taking a break from being photographed by the paparazzi on the beach and is getting back to work. He is going to be the executive producer, through his company J.K. Livin’ Productions and in partnership with Fox, of a new animated series named, “Rooster Tales.” Apparently the story will revolve around his older brother: Mike “Rooster” McConaughey’s crazy life.

The series is reported to “follow the world of a beer-swilling, redneck sheriff who marries a much younger woman from Mexico.” According to McConaughey, “My brother’s life is so unbelievable, we had to animate it.” Hmm, maybe he should go back to doing yoga on the beach, because this sounds almost like a recipe for disaster. But, I guess it is too early to judge.

It’s still currently in the script stage, and the questions are oozing out from me already. First of all, why is it going to be animated? If his brother’s life is so unbelievable, doesn’t making it into a cartoon going to make it more unbelievable? Also, don’t we already have  an animated show called “Family Guy” about a guy who’s not all there who marries a woman who is much hotter than he is?

Anyway, like I said, it is too soon to judge, but one thing is for sure. Mike “Rooster” McConaughey is also going to executive produce this series, and if he is as creative in making an animated series like he is in naming his children — according to Matthew McConaughey, he told Conan O’Brien in 2006 that his older brother named his second son Miller Lyte after his favorite drink (poor kid)–then this animated series might just be the solution to getting Matthew McConaughey to put on a damn t-shirt.

Perez Hilton
A Cartoon About THIS?!?!
Star Magazine
Will Matthew McConaughey Name His Son After A Beer?