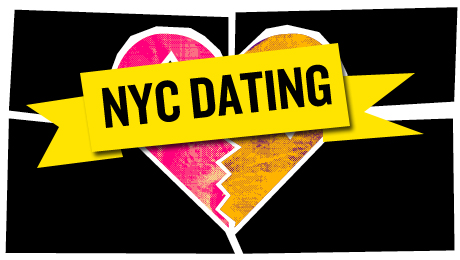 Dating is a tenuous affair, especially in a vibrant ‘everyman for himself’ domain like New York City. What one learns after having spent some time in NY is that dating isn’t just really a desire to connect emotionally or romantically. It is also a platform by which many of us wish to jettison to, well, the next platform. In one sense, dating, given the current economic tensions and the perceived ‘fantastic possibilities’ associated with the correct partner (whatever that word means for you.), has become a scramble to position oneself in the dizzy milieu of social possibilities and affairs of the heart. Dating in Ny has also morphed into opportunistic behavior, positioning, repositioning, scrambling and reassessing the way a portfolio manager assesses his stock portfolio every morning when he/she turns up to work. What has started to matter more in these very unsettled times isn’t so much the manifestation of people gravitating toward their soul mates but the expediency of said gravitation, and of course, the quick get off. One has to wonder whether the dating game has now morphed into a shopping bazaar where ‘love’ is constantly displayed on sale and what was once considered a meeting of souls has now degenerated to a grab for fame, expediency, survival, and social positioning.

In an article featured in the New York Times last week, author David Brooks, marvels at the way technology, specifically that of the internet and text messaging , has changed the dynamics of how we now construe our mating rituals. He references a series of columns that have been featured in the NY magazine which manifest the diabolical journals of souls on the prowl and opines that – ‘the most interesting part of the diaries concerns the way cellphones have influenced courtship. On nights when they are out, the diarists are often texting multiple possible partners in search of the best arrangement.’

It is no accident that he points this out, because this has become the standard way people now reach out to each other and enter into social engagements. In essence, we have become a conglomerate of souls one finger pulse away from renegotiating who we will see that evening, who we will postpone, downgrade, upgrade and reconsider. So even though you may have a date set up for that evening, it is very conceivable with T minus 43 minutes, one may find themselves text trolling for other alternatives. If this sounds very familiar to the way people go online and bid for items on EBAY, it’s because that is exactly how business is done. Any illusion otherwise lies in the mind of a person headed for heartbreak.

The obvious question is “how did this situation arise?” and one clue might be to consider the effect of technology and the way we use it. Technology has now changed the way we relate to each other and how, for a society forced to fend for itself (after all he might be a great actor but don’t expect the state to look after the two of you if he can’t land those gigs), we are forever made to consider arrangements and social relations not so much as a feeding of the soul but as a mechanism to ensure our survival. Does it make sense for young hot women to go out with men 15- 20 years their senior? In one sense, Yes, and we can all point to a variety of intriguing factors that may make such relations a viable alternative. The status, the security, and even the maturity and charisma of an older man who has resolved and affirmed himself may be desirable in women who were learning geography when he was making his fortune. Still, there is something very odd about a young woman holding hands with an older man, especially when deep down one realizes that beauty and youth belong together and not on the opposite sides of the scale. But this is survival, my dears, and once a young woman has tasted the virtues and the glamor that a city like NY can offer she is loathe to walk away from it. In essence, she has traded her soul for a handsome affluent devil, but devil he is. These gentlemen harbor no illusions as to why they are so desired by the opposite sex, and they too are just as guilty (if that is the correct word?) in texting and lining up one hot blonde after the other. Even if the illusion projected is that “You are the only one for me, baby.”