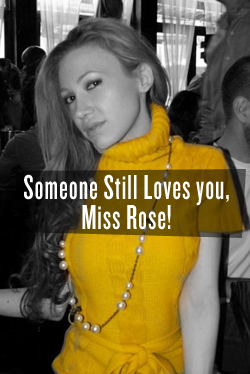 Why the world (Gawker) can’t live without Devorah.

It looks like Gawker is at it again, picking on our favorite media celebrity (after Rachelle Hruska) and Nick Ogre Denton (who actually owns the beast that feeds on desolate souls). The drama. Devorah Rose (again). How?

During celebrations for Guest of Guest’s re design of their website (to which we weren’t invited…blah!) an assortment of bloggers, society and photogenic types were seen yawning profusely as a staged cat fight (for TV) took place in the periphery between rich gal Tinsley Mortimer and our heroine Devorah Rose. Apparently, the reason for the cat fight left little to imagination, something about Tinsley’s boy toy Prince Casimir Wittgenstein-Sayn being a ham. There possibly was something about how the world is really a beautiful place as long as bitch cat fights can generate the most spontaneous tweeting and texting humanly possible (we assume fake or not, it did). Annoyed or turned on (we haven’t decided which yet…) Gawker decided that it would add fire to the faux glamourpuss fight by turning Devorah into a heap of uranium trash. Admittedly funny, (sorry Devorah) the trash journal (which even we perversely enjoy and admire) decides to put the world of Devorah into perspective for us all:

By the time we see the finished product (in Tinsley’s case, the show comes out in January), it has been chewed, swallowed, digested, and pooped back out so what we end up with is a beautiful sparkly diamond turd of a reality television moment. We’ll be so blinded by the dramatic luster that we won’t even care that it was effectively staged, we’ll all just be covering our gaping mouths at that bitchy thing The Tinz said about The Dev’s outfit.

Well, we wonder if the editor of Social Life and face of diNeila bikinis is signing her real name to all those reality show release forms. Which is Deborah Denise Trachtenberg. Yesterday when the crew was following her to the airport, they wouldn’t let her on board because she was trying to get past security using pseudonym Devorah Rose and they weren’t having it. What, you expect a fake editor who engages in fake fights to not have a fake name?

In the end, Gawker metaphorically assassinates our princess but not before turning themselves into the twitter/text/ gossip smut bitch they so despise, not to mention warn us about.

Gawker: more fake and hysterical than we can all ever muster, but at least you bring a smile to our face. Maybe a tear to poor Devorah’s…

Gawker make us laugh one more time- the kettle calling the pot black.

Gawker gives you more yummy Trash. Who cares? You do of course!

CT Investment banker, 56, jumps to his suicide death after filing...