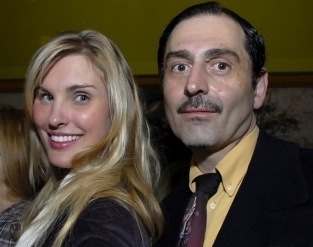 One of the prerequisites of being a socialite or at least covering the affairs of socialites is that one has to immerse themselves in the subtleties of behaving and looking as someone who spends the greater part of the day, nay the year sequestrated between some wooden oak dining room with skimpy attaches, a very busy rolodex and the aplomb gesture of effortless élan and very well appointed affairs to turn up to. After all the very definition of a socialite requires one to hobnob and socialize, have something witty to say, a trust fund to live off (a myth no?) and a very good profile for the cameras when they finally come. All of which we did with the kind benediction of a Guest of a Guest last night at Bungalow 8.

See media reaction to this story.

Last night saw this Scallywag arrive with his enterourage (another prerequisite for a burgeoning socialite…) to celebrate the gentle affairs of good merriment, good grace and the aroma of panache at the very stylish and yes sexy group called Guest of a Guest. We couldn’t help but notice all the blondes, the magazine covers and articles they have all graced escaping our memory, the well appointed cheek bones and the banter and giddy laughter that usually comes with a mouthful of gin or at the very least a bottle of good champagne.

Spotting rude boy Kristian Laliberte upon our entry we couldn’t help but covert in his witty banter and dizzy sensibilities. As you may have guessed another desired accoutrement of being a much vanquished socialite. With double and triple kisses to the cheeks we proceeded to mildly terrorize Mr. Laliberte but we found in the end this dapper boy terrorizing us and actually loving it.

SCV: Tell us dear chap what makes a socialite?

Kristian: Socialites? Do they still exist? I didn’t know?

SCV: Yes we heard they’re still around. In fact we heard that you may even fit this bill yourself?

(Aspiring or actual socialites unlike socialites of old are required to respond to wit with wit, in the past a cold glare would have sufficed…)

Kristian: Well one mustn’t listen to everything they hear.

SCV: Is that because one is disposed to hear what they really want to hear as opposed to what is actually said?

Kristian: Well if you must know I think socialites are a dying breed.

SCV: In what sense?

SCV: Were they all shot down in some alley?

Kristian: The idea of a socialite has changed, for the most part it’s always been a man made myth, perpetuated by the media. If you must know real socialites they’ve come and gone. Today one can become a socialite just by sleeping with someone, appearing on some reality tv show or simply having lots of plastic surgery. It didn’t always used to be this way. To have been a socialite in the past was really to be associated with social, charity and philanthropic causes, and you really don’t get too much of that when you’re busy sleeping around with some one?

SCV: Is there anyone you are sleeping with around right now?

Kristian: Always. To my left I have my boyfriend Sean and to my right Ana Devon Rose, my wife.

SCV: That’s very bold of you. Do they know about each other?

Kristian: I should think so. After all they’ve been introduced to each other a number of times.

SCV: And no hair or nails were spilt?

SCV: So I trust it’s all a very happy arrangement.

Kristian: Yes, quite amiable. Have you not noticed how they stroke each other’s face?

SCV: Yes rather soothingly. Tell us Kristian besides attending to your bedtime manners what else are you doing?

SCV: Yes, after all a socialite or aspiring socialite needn’t have a real job.

Kristian: That would be a trifle uncomfortable.

SCV: And unbearable. So is there a novel in the works?

Kristian: Funny you should ask.

SCV: Of course it is.

And with that I bid Mr. Laliberte a pleasant evening as I went on with the happy business of appearing refreshingly idle and alert, banal and mindless, effervescent and confused, outwardly consumed with valor, inwardly wondering what was on tv later that night and so on. These are the things we aspiring and actual socialites think about as you flash your camera on us. So next time you take a good look at that picture spare a thought for the poor soul inside those photos who is half wondering and laughing to himself –

“Why do they care so much about what I have to say.”

But as I have reiterated a mouthful of gin and a good bottle of champagne can so easily change those thoughts, as it surely has right now as we plot our next story and posture. That said we do want to thank the lovely ,Rachelle Hruska and her team over there at Guest of a Guest for having us last night, entertaining us and excusing the vague predilection of having to survive the camera and the ensuing reality shows. After all what’s a socialite to do….?