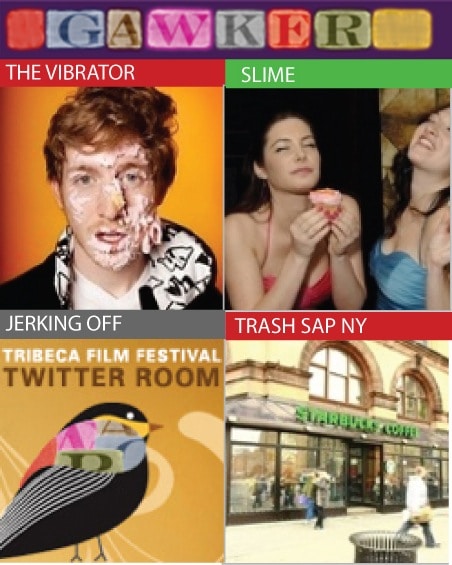 If one pays enough attention to what they read and see in the mainstream they will  inevitably come to the conclusion that they are consuming a smorgasbord of junk. Stuffed caviar with long legs, useless gossip, over dried tentacles, and sugar coated to the point where you are left licking your fingers dry. Delicious it may be, but like most things in our over ‘fat-turated’ culture, junk will always sell even when it’s long gone bad. Of course trying to understand why the thing in our fridge is still the preferred diet of supposed cultural gourmands and the low brow is like trying to understand why a gifted artist, surgeon, etc, is both a genius and alcoholic at the same time.

Before the advent of faux gutter bees like Gawker and celebrity rubbish bag specialists, TMZ, came along one was content to salivate on their daily page six which could be read neatly and quickly on the way to work before being rightly trashed in the bin the minute one stepped into the office. These days, things couldn’t be further afar, with your brain cells being continuously siphoned by ridiculous stories of who snorted what, who fxcked who, who wants to fxck who or is no longer fxcking who (yes the correct word is dating, but then again if we were all correct such themes wouldn’t be of public discourse). With the advent of the internet, especially since the early 2000’s being in touch with the false sense of life (think of it the way drugs, alcohol or uncontrollable shopping alters ones perception) has become the new norm. Where what used to be understood to be openly ridiculous and faux pas suddenly became divine and too good to be put down.

Enter Gawker; these days one can spend entire days having their brain cells nullified as gutter sites like Gawker take to their airwaves with their supposed critique of social behavior and faux pas, when in fact all they are doing is joining in the gutter liturgy and often sullying it out of control to the point where a Gawker sighting or faux labeling is a kind of validation of it’s own complicity in engaging mud slinging and lowering the standards of the general media who then hustle to either become like Gawker , loved by Gawker (a fat chance we think) or lampooned for being too literary (poor N+1).

When did it all reach it’s nadir, was it when one could see trophy daughters of social divinity types like the Hilton clan (yes Paris) becoming bait of the day, or was it when trash singers (Britney Spears) from the wrong side of the social strand (so declared Gawker) took to out of control behavior and public redemption? Perhaps we are still working our way to it’s nadir now that we can read with glee on any blog about the trials and tribulations of the affluent set and their latest social conquests and party hang out spots? These days they like to call them micro celebrities. A cute term if we’ve ever heard one…

Take Gawker’s unrelenting attack on Julia Allison, (micro celebrity du jour) someone we don’t particularly care about, and only heard about after Gawker kept bringing up this floozy’s name. Gossip columnist, oops we meant to say ex dating columnist this girl is always on the receiving end for one thing or another, did she cross the line to increase her facebook fan base, did she throw a fit when she wasn’t supposed to, did she claim to be a celebrity when Gawker and it’s entourage commentators (which Scallywag was from time to time until they banned us… ) decide that she was no longer a celebrity after they had made her a celebrity(after all only Gawker is the rightful celebrity). Or did she just offend some barometer of acceptable behavior that only Gawker can break on a religious daily level with it’s scandalous and ridiculous observations?

The question ultimately is why of course does Gawker keep getting bigger, never mind their internal editorial disarray and hiring and firing of writers like an erratic sea saw? This year alone Gawker’s traffic reached staggering proportions, accelerating while perversely the world and the country was deteriorating (does this infer an inverse relationship?)- with unique hits per month over the one million mark while a year ago it’s unique visitor mark was a mere 300,000 unique visitors a month.

A cursory surveying of this weekend’s junk sale can find one being intrigued to find out that ‘Golden Girl’ actress Bea Arthur’s recent death will be heavily mourned by the gay community (as opposed to straight people who never got the show about a bunch of old gals surveying the scene? ), that some idiot called Jesse Water’s twitter account is now fake which means exactly nothing to anyone with half a brain cell or the where abouts of actress Kate Hudson. Really, what’s the fascination? It’s like being entertained by a hard on that can only get a hard on when copious amounts of Viagra are digested.

What is it with the media and creative class who are (or used to be?) the site’s constituency who keep coming up with such intense dribble? Then again maybe the group of writers hanging out this weekend for Gawker weren’t in any particular mood to be creative, and offer some real thinking or commentary on society so they resorted to what they resorted to when they were high school bullies (at this juncture it is safe to assume before becoming a writer for Gawker one needs to show the scar ratio inflicted on fellow pupils whilst at school, preferably one of those preppy ignoramus schools where unkempt kids end up being incubated at the dispense of their rich parents and eventually becoming investment bankers or incorrigible bloggers).