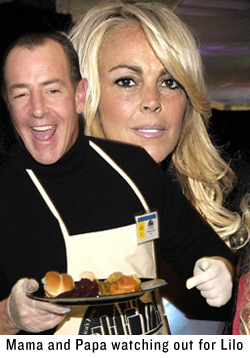 Let the blood pour out. A day in the life of Lilo.

We don’t know if a family as wacky as the Lohans has ever existed in America before but, in any event, they have finally arrived and, to make sure you get through your meandering miserable life, they have collectively provided a new chapter to collective misery and public humiliation.

The latest grub has this, coming out of the NY Daily News.

“Michael Lohan needs to focus on being a parent, paying child support, of which he is six months behind, and making up for all the years he was an absentee dad,” Dina told People over the weekend. “And stop going on national television talking about his children publicly.”

This is after Mama Lohan was apparently pissed off with Papa Lohan who took fatherly matters into his own hands by publicly dissing his daughter Lilo on national TV.

Papa Lohan of course had this to offer-

“If I can’t get a conservatorship, then I’m going to take her to an undisclosed location and get her straight,” he told the photo agency. “But I know I’m gonna get charged [with] kidnapping.”

Yummy, are you impressed? Well there’s more grub still left on the plate. The he said, she said, public humiliation continues. Don’t ever stop until America gets enough.

What was Lilos reaction do you wonder?

“Lindsay is actively getting a restraining order, her lawyers have already been contacted,” the source told People. “She’s scared. This is really serious.”

Figures Lilo has to get in the act too.

When your day is feeling blue, spare a thought for other dysfunctional families who are to good to be true.

Sometimes reality is bound to turn into surreality. Not that you’re willing to turn off the TV set.