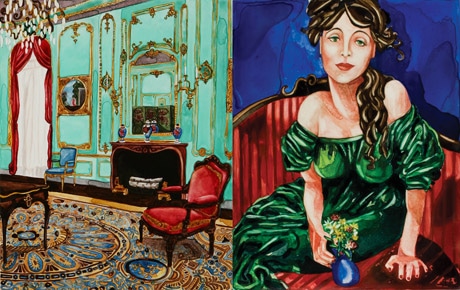 The first thought that crosses my mind is: This cannot be her. She stands in the reception area of Downtown Manhattan’s dimly lit, designer-decadent BOND ST restaurant, flawless blonde hair flipped to a Charlie’s Angels-esque wave, electric pink blouse, glittering pendant about her neck. This can’t be the same woman whose mind conjures visual majesty, I think – whose hands paint this majesty with dream-oriented swagger and startling substantial watercolors, whose paintings sell to collectors in Shanghai and Moscow. She’s too beautiful and too young to be so brilliant. “Annika,” she confirms warmly in response to my dumbfounded expression. It is her, the wondrous painter, Annika Connor.

Connor’s paintings, flush with a passion for full-bodied color, captivate any audience possessing even a hint of reverie for beauty, feminine mystique and a vivacious aesthetic. Her collection of painted, un peopled settings echo sentiments of Diane Arbus and Edward Hopper in their personification of inatimate objects at rest. Her dance-influenced collection reveals double narrative portraits of whimsical dancers powerfully poised to rattle the heart, her landscapes manage the surreal stillness of slumbering dreams.

Connor sits down to dine and dish to Scallywag her most recent book project chronicling forty new artist’s works and her September 24th Pointe Suite Art Ball fundraiser. As a self-sustained artist in the middle of an economic crisis, Connor is rarely thinking of crisis. She is member of countless organizations and a business woman to boot. Terrifically enthralled with her exotic cocktail and the array of wondrous Japanese cuisine lain out before us, I witness the endless positive energy and passionate work ethic that accounts for her early rise to budding success. Connor’s most prominent feature is that she is passionate about almost everything.

SCV: Where are you from originally?

A.C: I grew up in Atlanta, Georgia, but my mother is from Stockholm, Sweden so I used to spend my summers in Sweden growing up. It was fantastic. For the houses in Sweden that are on the water, the main source of transportation is moto boats. So as a little kid, the most mundane errand would take on this element of such excitement.

SCV: Did you paint from a small age?

A.C: Yes, actually I was a pretty eccentric little kid. I got lost in my imagination a lot. My dad had a lot of friends that were artists and by the time I was nine or ten he had taken me over to one of his friend’s studios. I ended up spending several summers in her studio. I started painting in oils when I was nine. As kids do, your interests shifts. So I fell out of it and then came back into it when I was about fifteen.

SCV: Were you in an art high school?

A.C: I went to a super private catholic school, sort of like the Atlanta version of the Gossip Girl high school. The art history program they have there is phenomenal. The teacher was ranked for having the best art history program in the world. He was amazing and exposed me to a lot of incredible artists. My school really had a sports emphasis, but I kind of got taken under his wing.

SCV: Did you have an artistically supportive family as well?

A.C: My father does sculpture, not as a living, but he’s really into bronze casting. And my mother is an amazing seamstress. My uncle and my grandfather are big art collectors, so I was always exposed to that. I also have a cousin who’s a painter. They were all absolutely supportive.