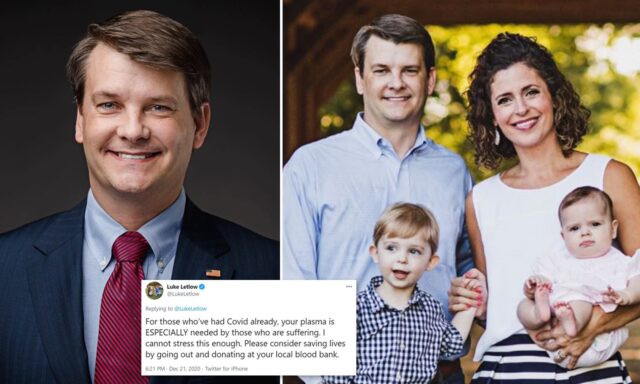 ‘It is with heavy hearts that Donna and I offer our condolences to Congressman-elect Luke Letlow’s family on his passing after a battle with COVID-19,’ Edwards said in a statement Tuesday night according to abcnews. ‘COVID-19 has taken Congressman-elect Letlow from us far too soon. I am heartbroken that he will not be able to serve our people as a U.S. Representative, but I am even more devastated for his loving family.’

Letlow, 41, was recently elected to represent Louisiana’s 5th Congressional District. He was poised to take his seat representing Louisiana in the House of Representatives on Sunday.

Letlow announced on Dec. 18 that he tested positive for coronavirus and that he would begin following all Centers for Disease Control and Prevention (CDC) guidelines and would quarantine. By Dec. 21, the congressman-elect said he was undergoing treatment at St. Francis Medical Central in Monroe, Louisiana, for COVID-19.

A representative for Letlow announced on Dec. 23 that the Republican congressman-elect was being transferred from St. Francis to Ochsner LSU Health Shreveport Academic Medical Center in Shreveport, Louisiana, to continue undergoing treatment for COVID-19 as his conditions worsened.

After the transfer, doctors said the congressman-elect was in stable condition in the intensive care unit and ‘receiving Remdesivir and steroids as part of his regiment therapy,’ (the same treatment President Trump had been given last month) according to a statement from Dr. G.E. Ghali, Chancellor of LSU Health Shreveport.

Unclear was whether the Congressman-elect had any pre-existing conditions.

Letlow held multiple campaign events including meet-and-greets where people did not wear masks but appeared to be standing six feet apart.

On other occasions while campaigning, he was seen to be wearing a mask.

On December 18, he tweeted his diagnosis, saying: ‘Thank you to everyone for your kind words and prayers. I have tested positive for COVID-19.

‘I’m at home resting, following all CDC guidelines, quarantine protocols, and the recommendations of my doctors.’

‘The family appreciates the numerous prayers and support over the past days but asks for privacy during this difficult and unexpected time,’ the family said in a statement that was first reported by the Monroe News-Star. ‘A statement from the family along with funeral arrangements will be announced at a later time.’

Letlow is survived by his wife, Julia, and two young children.

He is the first member or member-elect of Congress to die from the coronavirus.

Of note, Letlow’s death follows a retinue of no less than 40 Republican White House political insiders in recent months contracting coronavirus, as President Trump had publicly dismissed the plausibility of the deadly virus in earlier months, refusing to wear masks, maintain social distancing, seemingly downplaying scientific evidence, while maintaining that industry and business stay open in the face of unknown risks.

Louisiana has had more than 304,485 diagnosed cases of COVID-19 since the pandemic began, with at least 7,397 deaths, according to a count kept by Johns Hopkins University.