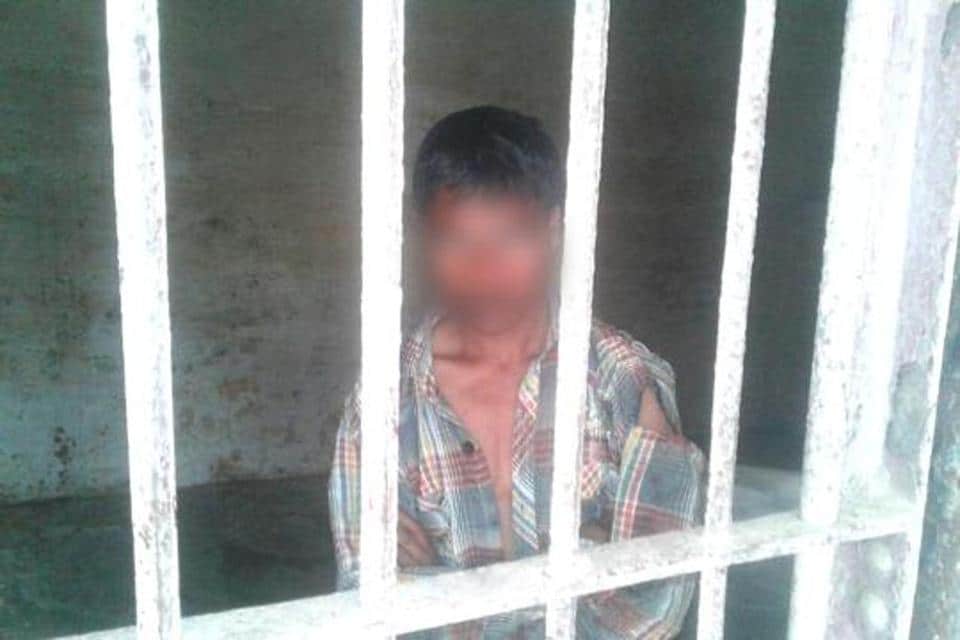 Nazim Miyan Indian cannibal has been arrested and charged with abduction and murder after decapitating a seven year old boy and eating parts of his flesh.

Local media has told of the moment a horrified mother came across her cannibal son eating a seven year old boy he had murdered and beheaded in India.

The young man’s mother is said to have found her son, Miyan, aged in his early to mid 20’s next to the corpse of a child in an abandoned house in Amariya in northern India’s Uttar Pradesh.

The young victim’s neck, arms and legs had been cut in to several pieces after the child had been lured away from his friends.

At the time, the son was observed to have blood smeared on his face, with police later corroborating that the son had eaten the flesh of the child.

Told a responding police officer: ‘The body was lying on the floor with the decapitated head beside it.

‘The skin on the abdomen was missing and internal body parts and bloodstains were scattered across the room.’

Miyan was sitting near the corpse and surrendered to police without any resistance.

Speculation told of the son decapitating the boy after a failed bid to sexually abuse him.

Reiterated Pilibhit superintendent of police Devranjan Verma said, ‘He apparently tried to molest the boy before killing him and disfiguring his body.’

Local reports told of the mother’s cannibal son being beaten up by locals before he could be taken away.

Police recovered a knife and a shovel from the grisly scene in Pilibhit.

Hundreds gathered outside a police station demanding the cannibal son should be be killed.

Upon his arrest, the cannibal son was charged with murder and abduction noted the dailymail.

Miyan, described locally as a drug addict, apparently lured Mohammad Monis into the house while he was playing outside with other children.

Upon being quizzed by investigators the cannibal son was incoherent, possibly the result of having ingesting drugs. What type of drugs the son used was not described nor whether the use of drugs led to him luring his victim and eating him.

Neighbors said despite being a drug addict, Nazim was softly spoken and a ‘nice’ person.

The Indian cannibal son remained in custody pending a court appearance in Pilibhit on Wednesday.

‘We will try to complete the investigation of the case and submit the final charge sheet in court,’ police officer Devranjan Verma told the Hindustan Times.

Pursuant to the son’s arrest, police said Nazim not having a previous criminal record, while noting he appeared calm like a hardened criminal at the time of his arrest.