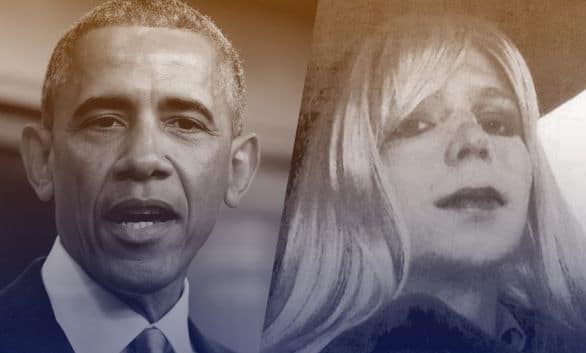 In a move that surprised (and angered) many, President Barrack Obama on Tuesday commuted the 35 year prison sentence of Chelsea Manning.

The gesture comes after Manning, a transgender woman and former military intelligence analyst leaked hundred of thousands of State Department cables along with Iraq and Afghanistan military logs to Wikileaks beginning in 2010.

Manning’s actions led to her eventually being found guilty on 20 out of 22 possible charges (including violating the US Espionage Act), while spared being convicted of the most serious charge against her; aiding the enemy, which could have earned the private a life sentence.

Come May 17, Manning will be a free person (define free) after having been held at Fort Leavenworth, an all-male Army prison in eastern Kansas, despite Manning’s request to transfer to a civilian prison.

Manning’s leaks ended up being widely shared and scrutinized, with many aghast at the notion of the US committing and perpetuating war crimes (despite the hoi poi circus act of the corporate mainstream press dictum that could never imagine otherwise), ensuring many questioning the US’s mandate and how it exactly went about those mandates (often beyond legal boundaries and to the detriment of civil liberties- for the often called axiom of ‘security’ and ‘freedom’ of the greater public- yes an oxymoron in a toast bin).

Needless to say, Manning’s leaks didn’t go down too well with the US government, with the whistle blower according to a UN inquiry, being tortured during her 11 month incarceration in the brig at Quantico.

Manning was kept in solitary confinement and put under a ‘suicide watch’ by her jailers despite the opposition of her own physician.  The watch involved Manning being made to sleep nude, enchained and being woken up many times each night to be checked, for months on end.

During her subsequent jailing, Manning went on a hunger strike along with having made two attempts at her own life. Courses of action that led to continued scrutiny of the Obama administration’s policies as it continued to ramp up (cheer for the empire) its draconian and subversive tools of authoritarianism along with a revived domestic surveillance program that eliminated habeas corpus.

Yes you live in a free society. Until your freedom is the subject of national security, alas.

Obama’s commutation of Manning’s sentence is all the more surprising because his administration was the hardest in recent memory on whistle blowers and on the journalists to whom they leaked.

Manning was denied a full pardon and will be most likely denied government benefits, and along with her dishonorable discharge from the army, denied ever working for the US government again. Save for the paid media interviews that might come her way, her life on the outside come May, 2017 will continue to be a living hell.

That said, the pardoning of Manning led to commentators wondering, why exactly did Obama who has led one of the staunchest campaigns against whistle blowers being offered a get out of jail card?

Worth noting the decision to commute Chelsea Manning’s sentence was made against the staunch objections of Secretary of Defense Ash Carter‘s wishes.

A former intelligence official described being ‘shocked’ to learn of Obama’s decision, adding that the ‘entire intelligence community is deflated by this inexplicable use of executive power.’

.@POTUS‘s commutation of #ChelseaManning’s sentence is a grave mistake that will encourage further acts of espionage https://t.co/nB5SeHCrKM

While Senator John McCain, chairman of the Senate armed services committee, described the decision to commute Chelsea Manning’s jail sentence as a ‘grave mistake’ that he fears ‘will encourage further acts of espionage and undermine military discipline. It also devalues the courage of real whistleblowers who have used proper channels to hold our government accountable.’

Adding: ‘It is a sad, yet perhaps fitting commentary on President Obama’s failed national security policies that he would commute the sentence of an individual that endangered the lives of American troops, diplomats, and intelligence sources by leaking hundreds of thousands of sensitive government documents to WikiLeaks, a virulently anti-American organisation that was a tool of Russia’s recent interference in our elections.’

Because it would piss people off.

He is an agitator, he gets off on this kind of crap!

Putting on a wig and makeup doesn’t make someone a women if they have a penis and a Y chromosome. Sorry. RE: Chelsea Manning

The Chelsea Manning commutation is just another example of LGBT privilege

While many continue to condemn the decision, the media scrutinized the decision, with many offering a glove box analysis of what was going through Obama’s mind.

Noted cnn: ‘Part of the thinking was that Manning’s term was quite “extreme” and “without historical precedent” and she had already served more than six years, the source said, adding that another factor is the personal and emotional side of the Manning story: she is transgender, in a male prison, “facing an uncertain fate behind bars.”

Noted the guardian: ‘Obama has commuted the sentences of 1,385 individuals, more than any other US president. The White House official said more commutations are expected ”most likely on Thursday”.

The official said the president believed six years in prison was sufficient relative to sentences given to others who committed similar crimes.

“Manning is somebody who accepted responsibility for the crimes she committed,” the official said. “She has expressed remorse for those crimes.”

Noted one columnist at hotair: ‘If he had any interest in whistleblowing over a specific instance or instances of what he viewed as misconduct in Iraq there were ample channels available for him to take that information to his superiors. If he received no satisfaction there he could have taken specific videos and communications regarding those incidents directly to the media, asking for anonymity from the reporter. That would have still been a violation, but he could have made a case for himself as exposing misdeeds.’

Continuing, hold your breath: ‘Barack Obama has insulted the military and the nation with this shameful act. Seven years out of a 35 year stretch is nothing compared to the crimes that were committed. And being “transgender” is not a free pass to get away with what he did, regardless of how politically popular it might be with liberals. This is a disgrace.’

While theweek plausibly pondered: ‘Maybe he decided that mercy was the appropriate response for a suicidal transgender woman stuck in a male military prison, and for the military justice system that would have to handle Manning’s desire to medically transition from man to woman.’

While zerohedge spared no prisoners in this insightful take on Chelsea Manning’s sentence commute:

‘How does Obama, and his party, explain the sudden about face on Manning, and their forgiveness for Manning’s intelligence “betrayal”, that jeopardized the “fabric of US democracy” and “endangered US national security”?

Are we to believe that John Podesta’s emails as worthy enough for conflict with Russia, but Manning’s classified document release, that exposed the highest level of US military intelligence information, is now considered forgivable?

Continuing: ‘Or can we simply conclude that Obama’s “red scare” is simply a political ploy to damage President-elect Trump, and excuse Hillary Clinton (and the Democrat Party) from running the most pathetic election in history…because the false narrative that John Podesta’s email leak threatens to destroy “US democracy”, has know fallen completely apart.’

Chase Strangio, an attorney for the American Civil Liberties Union, which represented Manning, said he was ‘relieved and thankful’ Obama commuted her sentence, with Amnesty International also cheering news of Manning’s commutation.

‘Chelsea Manning exposed serious abuses, and as a result, her own human rights have been violated by the US government for years,’ Margaret Huang, the group’s executive director, said in a statement.

‘President Obama was right to commute her sentence, but it is long overdue. It is unconscionable that she languished in prison for years while those allegedly implicated by the information she revealed still haven’t been brought to justice.’

Told Sarah Harrison, who has defended Manning as Active Director of the Courage nonprofit, ‘Freeing her is clearly and unambiguously the right thing to do.’

Of course it remains debatable that Obama’s decision to commute Manning’s sentence had much to do with ethics and or a moral equivalency.

‘Chelsea’s conviction under the Espionage Act and 35-year sentence set a terrible precedent that is left entirely intact by this commutation. Who knows what Donald Trump will do with this precedent, and these powers, that Obama has left him?’

Which is to wonder save for attempting to self rectify a terrible legacy and steer himself back into the good graces of the neutered left wing segment of the Democratic party, and a disenchanted public at large’s sentiments, were Obama’s actions a continued attempt to affect the incoming presidency of Donald Trump and what many assume will be a fascist lite over reach into public affairs?

Contemplated theweek, in a point of view that closely parallels this author’s: ‘By granting clemency to people who, at least in their own minds, tried to inform the public about what the government is doing in secret, Obama reminds America of sunlight’s power to disinfect, right before a historically opaque president takes over. Did Obama live up to his vow to run the “most transparent administration in history”? Not exactly, or at least not on purpose. But the Trump administration promises to be something else entirely.’

Which raises the final question: Will Julian Assange make good and surrender to himself to US authorities after last week’s teaser that the Wikileaks chief’s willingness to surrender if Manning was released? – The answer in a nutshell- No.

Assange knows he is most needed and useful on the outside as a freedom fighter and a courageous conduit of the misdeeds of government and the empire- something that Obama, the sophisticated constitutional lawyer may have pondered one recent 4am walk in the garden….

“Snowden and Manning revealed truths that needed to be told. Obama should pardon them both now.” https://t.co/0n66mRjloN