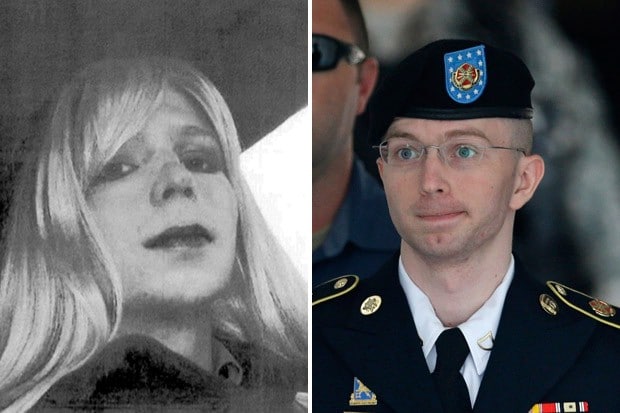 Making America dizzy this morning is the disclosure that Bradley Manning, the Army private sentenced to military prison for leaking classified documents, intends to live out the remainder of his life as a woman.

“I am Chelsea Manning. I am female,” the Army private wrote in a statement read on TODAY Thursday. “Given the way that I feel, and have felt since childhood, I want to begin hormone therapy as soon as possible. I hope that you will support me in this transition.”

“I also request that, starting today, you refer to me by my new name and use the feminine pronoun (except in official mail to the confinement facility),” Manning continued in the statement. “I look forward to receiving letters from supporters and having the opportunity to write back.”

When asked why Bradley Manning declined to disclose the information of her impending gender change, her lawyer, David Coombs went on to tell Today that his client feared using this moment to overshadow the case, and wanted to wait until the case was done before moving into the next stage of her life.”

Hmm, I know kids, I’m dipping an extra dosing of that barbecue sauce on my gizzards too.

Sentenced to 25-35 years yesterday after having been found guilty of 20 charges ranging from espionage to theft for leaking more than 700,000 documents to the WikiLeaks website while working in Iraq in 2010, the latest revelation has no doubt gone on to cause some to wonder if Manning’s struggles with gender identity as a gay soldier were a factor in his decision to leak.

During Manning’s trial,  his attorneys had gone on to present an email to a former supervisor from April 2010 in which Bradley Manning said he was transgender and joined the Army to “get rid of it.” The email, which had the subject line “My Problem,” also included a photo of Manning in which he is wearing a blonde wig and lipstick.

Asked by Savanna Guthrie whether the issue of gender reassignment played any role in espionage activities, David Combs responded:

On whether Manning will seek sexual reassignment surgery, Coombs said “I haven’t really discussed that aspect with her. Really, it’s more about getting the hormone therapy, so at this point I don’t know the answer to that.”

In the statement that went on to be read on TODAY, Manning thanked her supporters. “I want to thank everybody who has supported me over the last three years. Throughout this long ordeal, your letters of support and encouragement have helped keep me strong. I am forever indebted to those who wrote to me, made a donation to my defense fund, or came to watch a portion of the trial. I would especially like to thank Courage to Resist and the Bradley Manning Support Network for their tireless efforts in raising awareness for my case and providing for my legal representation.”

it’s only strange if you didn’t expect the man to be persistently demonized. news exists as stories we tell ourselves about ourselves, and so plays an important social role in defining what we are — and what we are not.

Good for him (her), but I’m worried that people will now dismiss him for being “weird” especially by any social conservatives who may have supported him up to this point. I hate to say it but this will probably hurt his chances of getting popular support for a pardon.

I think this is awesome. I hope she can find at least some amount of comfort in being herself during all this chaos and fuckery. If we’re lucky, people in the near future will get rid of their petty prejudices and ignorant assumptions in order to recognize the amount of bravery it takes to expose your government AND publicly announce something like this about yourself. I also hope other transwomen will feel encouraged and emboldened by this.

I don’t even want to think about how she must be viewed by the people who put him in jail… For someone to be mocked and not taken seriously over something they can’t change is depressing no matter what. Well at least Bradley gets to change into Chelsea…