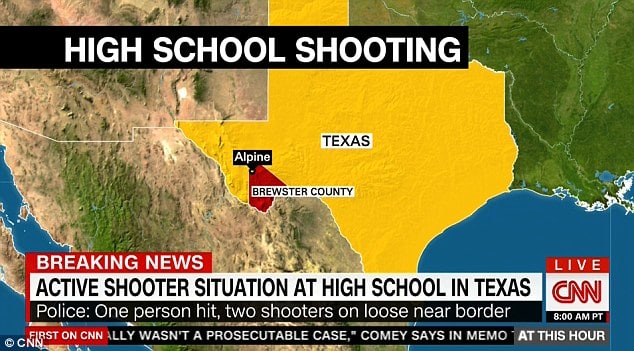 Alpine High School shooting: What led to a 14 year old straight A’s student targeting a fellow classmate? Said to have never been in trouble before.

Authorities have told of an unnamed Alpine High School female freshman student injuring a fellow student in West Texas after shooting at her.

Shot while using the school bathroom was a 16 year old victim with the shooter, a 14 year old girl later found dead as a result of a self inflicted wound to the head.

Reports of an active shooting came circa 9am, Thursday morning as the school was then put on lockdown told KLST-TV.

The Brewster County Sheriff’s Office told of the 14 year old female student brining a semi automatic pistol ‘with plenty of ammunition’ to school and shooting another female in the band hall bathroom before fatally turning the gun on herself.

According to KWES-TV, the shooter’s grandparents said their granddaughter was a straight A student with no indication of any trouble at home. Relatives told of the girl had only been living in the town for six months.

In the ensuing confusion that followed during this morning’s shooting, a Homeland Security agents responding to the scene was injured when a US Marshall accidentally shot him outside the school.

The sheriff’s office previously said that as many as two gunmen were attacking the school, but they are no longer searching for any other suspects.

One dead, one injured in a shooting at Alpine High School in Texas https://t.co/A5td02f6PZ

Both the shot student and the Homeland Security agent are being treated at Big Bend Medical Regional Center and are expected to survive.

The student victim, who was shot in the lower back, was reportedly strong enough to run outside and flag down a car to take her to the hospital.

A spokeswoman for Big Bend hospital said doctors there are are tending to three ‘victims’ of the Alpine High School shooting. It’s unclear who the third victim is.

Local reports tell of police being in the school by the time the shooter committed suicide. Police say that when they arrived at the school, they heard gunshots and found the female shooter dead in the bathroom. At first, they thought the shooter was actually a victim.

Yet to be necessarily understood if what led to the shooting, and whether the shot female student had been intentionally targeted and if so, why?

A student at the school, whose friend was shot, told CBS 7, ‘There was blood all over the hallway’.

A junior told CNN that second period had just started when a teacher outside her class began yelling ‘Get in the classroom!’

‘My teacher … yelled to everyone to get into the closet,’ the student said. ‘We heard someone yelling and running down the hall. We all started crying.’

Later, a law enforcement officer banged on the classroom door and escorted the children out of the building.

‘There was blood on the floor in the cafeteria that I saw when we went past it on our way out of the school,’ the student said. ‘One of the officers told us to keep our hands up and run out of the building, so I only saw the blood quickly.’

The student added: ‘It was so scary and very intense. I’ve never been so scared in my life.’

Student Taylor Hunt told CBS 7: ‘We all thought that Alpine would be a place where [this] wouldn’t happen and then it did happen.’

The Alpine High School shooting led to nearby Sul Ross State University being evacuated when a caller phoned police to place a bomb threat on the school.

‘Sheriff Dodson said someone called them and said “y’all better leave me alone”‘ and made threats against the school.

Sheriff Dodson says that the call came from the jail. Big Bend hospital, where the victims are being treated, was also the target of a similar threat.

The sheriff said that it was ‘ridiculous for someone to call in something like this’.

Alpine Independent School District describes just on 280 students being enrolled at Alpine High School, in the small town of just 6,500. Classes for the new year started on August 22. It is the lone high school in the town.

Female gunmen are extremely rare in mass shootings. A survey of mass shootings cited by the Washington Post resulting in the death of four or more people since 1966, found that just three of the 130 shooters were female.