Animal rights activists have told that they believed to have watched Morgan a SeaWorld killer whale trying to commit suicide after the Orca beached herself on a concrete slab at a Tenerife tourist park in late May.

Video footage (see below) caught by onlookers showed the mammal slumped motionless at the side of the pool for more than ten minutes at Loro Parque in Spain’s Canary Islands.

The incident comes after Morgan the SeaWorld killer whale was observed in a separate incident banging her head against a metal gate. A feat the ‘panicked’ Orca is alleged to have acted out in bid to escape its enclosure weeks earlier, on April 26.

According to animal activists site, the dolphinproject, the killer whale, who lives at Loro Parque with five other orcas owned by SeaWorld, had finished a show when she allegedly decided to beach herself recently.

A clip showed the young orca lying next to her tank as spectators got up to leave.

At the time, visitors walked by oblivious, although a few reportedly stopped to take selfies with the beached whale in the background.

Said to flop up and down a few times, Morgan soon stopped, laying in motionless state.

Writing underneath the video, one shocked viewer wrote: ‘Looks to me as if she’s trying to take her own life, I don’t blame her’.

Sève Jukka May added: ‘LIBEREZ LES ORQUES !!! LEUR PLACE EST DANS L’OCEAN !!! HONTE AUX HUMAINS QUI LES EXPLOITENT’ which translates as: ‘Free the orcas. Their place is in the ocean. Shame on humans who exploit them.’

Animal rights organization The Dolphin Project said: ‘We cannot explain the reason for her behavior.

‘Sadly, Morgan was still out of the water by the time the videographers had to leave.’

‘The orca is obviously in huge distress and rams its head forcefully against the metal gate in what seems to be an attempt to escape,’ Helene Hesselager O’Barry, an animal rights activist said about the footage.

‘This video shows the amount of stress and cruelty imposed on orcas as a result of confinement to small, barren tanks.’

The video comes as SeaWorld at the Tenerife park has come under increasing scrutiny for its treatment of whales in captivity.

But the park, which has a controversial history with its killer whales, insisted that the video shows a normal interaction between the two animals.

‘The video published by the Dolphin Project on its website is a new attempt at manipulation through exaggeration and dramatization of a completely normal situation in which there is no problem for the animals,‘ Loro Parque said in a statement. 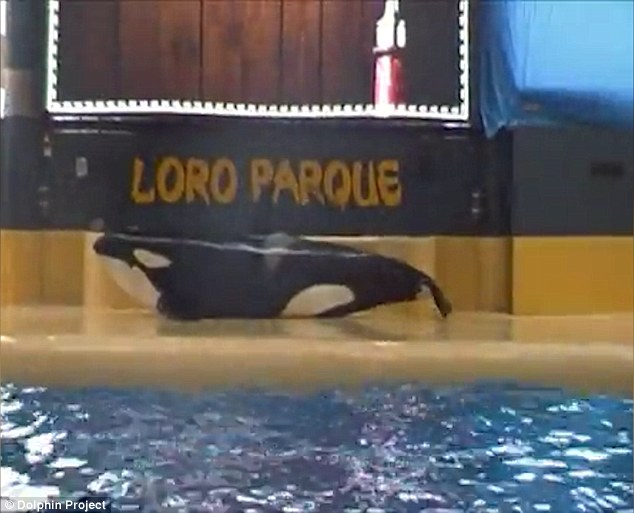 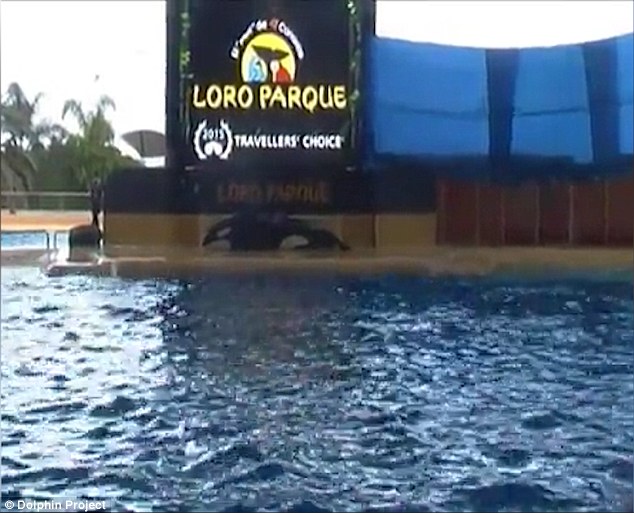 There have been other instances of seemingly bizarre behavior in SeaWorld’s orca whales.

Last year a video showed the whale Tilikum floating at the top of his tank, while orcas at SeaWorld San Antonio were said to have severe dental trauma.

The captive orcas were said to have ‘significant wearing’ on their teeth from allegedly chewing their tanks due to boredom.

Heather Rally, a wildlife veterinarian with PETA, told The Dodo: ‘Every single orca that I observed had significant wearing on their teeth, specifically on the lower mandible,’ she said.

‘They start chewing on their tanks. There’s boredom there as a factor, and there’s also stress… as soon as they start doing that they start to traumatize their teeth.’

A report via the dailymail notes wild orcas remain constantly moving and even swim while sleeping, although a few populations occasionally beach themselves for a short period while hunting.

If they are beached for too long the weight of their enormous mass – normally supported by the water’s bouyancy – can crush their internal organs and muscles.

Reiterated O’Barry after having visited Loro Parque: ‘We were shocked at the poor living conditions and commercial exploitation of the orcas and bottlenose dolphins there.’ 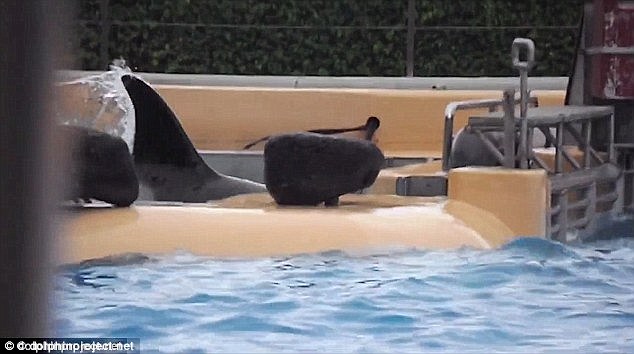