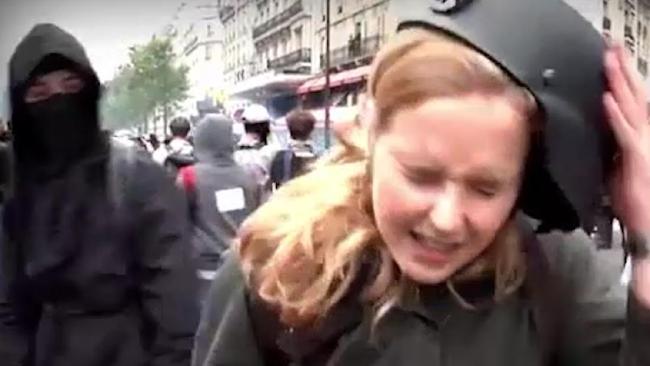 How did Anna Baranova a Russia Today journalist come to be struck by French labor protesters in Paris?

Anna Baranova a female journalist was struck by a masked protester as she reported on a demonstration in Paris.

According to a report via the mirror, the attack on the female Russia Today reporter came during anti labor reform protests in Paris on Tuesday.

Unperturbed, Anna Baranova carried on regardless with viewers having since garnered the ‘brave journalist’ accolades and sympathy on social media.

At the time, Baranova was reporting live from a demonstration organized by France’s Nuit Debout against proposed labor reforms. Reports told of extreme wings having also joined in the protests.

Perhaps having assuaged the risk of injury, the journalist at the time of her unprovoked attack was wearing a helmet with the word ‘Presse’ emblazoned across it, when a masked protester came up behind and struck Anna Barnova across her face and head, while knocking her helmet.

Despite being obviously dazed, the reporter, struggling to regain her composure carried on. In the background, an image of what appears to be another protester clapping the actions of the attacking protester.

The Nuit Debout movement is made up of students and trade unions and has been compared to the Occupy movement in the US and UK.

How or why the journalist came to be singled out, or because of her status as a journalist is yet to necessarily be understood.

Responding to the attack, Anna Baranova told Russia Today: ‘The crowd was made up of angry youths covering their faces with masks and scarfs, vandals looking for trouble,’

‘I wasn’t so much hurt as surprised – people actually come up and hit you on the head while you try to do your job. Wow.’

The video has gathered tens of thousands of views online, and hundreds of comments supporting Baranova while condemning the attack on the targeted journalist. 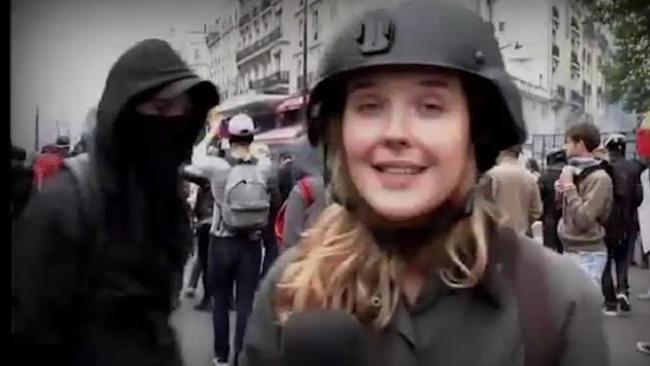