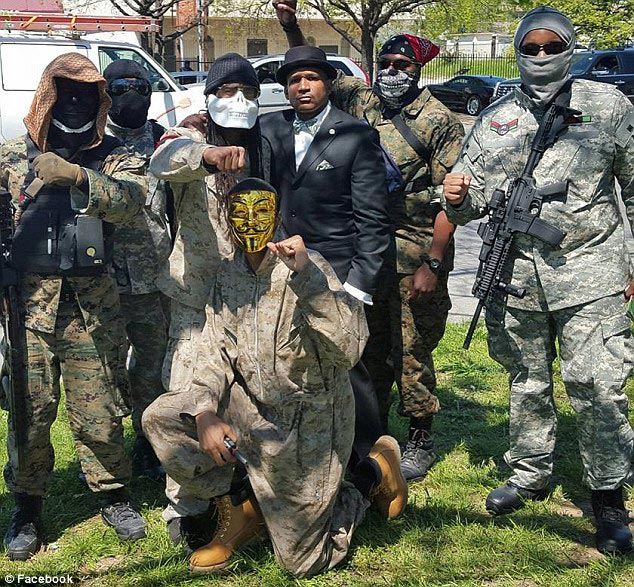 New Black Panther Party: Why have they taken on the cause of protecting Muslim interests? A militant racist group itself with its own radical agenda?

Ideological/racial tensions are on the up after a gun totting anti Muslim group protesting at a Dallas mosque on Saturday were met by also armed members of the New Black Panther party and the Huey P Newton Gun Club.

The havoc comes after the anti Muslim group, the Bureau of American Islamic Relations (BAIR) turned up in military garb and skeleton masks at the local Muslim prayer center in a bid to intimidate people from worshipping.

A report via RT tells that the hate group had expected an average day of bigotry and aggression at the Nation of Islam mosque on Martin Luther King Boulevard in South Dallas, only to find themselves outnumbered by the armed self-defense militant black movement group waiting for them.

Members of the community, along with the New Black Panther Party for Self-Defense and the Huey P Newton Gun Club, were there to protect the Muslims from the BAIR demonstrators.

Saturday’s protest and counter protest came after BAIR in December stalked Muslims at the Islamic Association of North Texas.

On the day of this weekends protests, eyewitness accounts told of both BAIR and new BPP groups making the most of open carry laws in Texas that allow residents to carry AK-47s and rifles on the streets.

There to watch the percolating tensions was the Dallas police force who had been notified prior of Saturday’s demonstration.

Told BAIR in a since deleted statement on its Facebook page:

‘We have decided to Protest the Nation of Islam for promoting violence against Americans openly and publicly. This is NOT about color of skin, not a white vs black thing, (not for us anyway).

‘This is about RADICAL ISLAM. They have threatened to continue killing Cops, Random White People and their children to further their agenda of hate and dominance through violence.

‘They have teamed up with C.A.I.R. and that is unacceptable as well. We cannot stand by while all these different Anti American, Arab radical Islamists team up with Nation of Islam/Black Panthers and White anti American Anarchist groups, joining together in the goal of destroying our Country and killing innocent people to gain Dominance through fear

‘We will be going in full gear for self defense only. This is a full gear situation, We have a comprehensive security plan for this event, all the bases are covered, you will be briefed by B.A.I.R. Team leaders and DPD as to how the security and self defense procedures will be handled.

‘There are back up forces, staged strategically around the entire area. Your safety is paramount to B.A.I.R so we have taken extreme precautions.

‘Again I repeat this is a FULL GEAR situation, not required but recommended. We will have the means in place to protect those who do not have weaponry and gear so come one come all its time to stand now, stand for what you believe in and don’t let evil win.’

The group previously protested at an event to welcome refugees in Irving in February, with right wing leader David Wright explaining, “We want to see how many are actually women and children.’

BAIR didn’t stay long, after being encouraged to leave by the police, with Saturday’s protest ending peacefully Fox 4 reports.

Responded Yafeuh Balogun, co founder of the Huey P Newton Gun Club: ‘They have no reason to bring themselves here to South Dallas. David Wright and his band of idiots, they’re out of their minds thinking they can bring their right-wing ideology into South Dallas.’

Adding: The community here in South Dallas, on Martin Luther King and Malcolm X spoke out, and you should see today, it wasn’t the Huey P Newton Gun Club that ran BAIR out of the community, it was the residents, and the people who live here who got BAIR out of here,” Balogun said.

According to the Southern Law Poverty center the New Black Panther Party, formed in 1989, portrays itself as a militant, modern-day expression of the black power movement. The human rights advocacy group also describes the black militant group as being a virulently racist and anti-Semitic organization whose leaders have encouraged violence against whites, Jews and law enforcement officers.

Nearly 50 years ago, armed members of the original BPP marched into California’s state Capitol building with demands for the nation’s leaders.

Behind the guns, their 10-point platform pushed for “radical” ideas like “decent housing”, an immediate end to police brutality, and “an end to the robbery by the capitalists of our black and oppressed communities.”