Siberian dog won’t leave spot where his owner was killed: A community has decided to rally behind a forlorn husky mongrel dog who continues to wait for its owner who will never return.

A devoted dog loyal to his dead owner, killed in a car accident two years ago along a road in Siberia has refused to leave the site of the crash.

Believed to be ‘patiently’ awaiting its owner’s return, the dog has shown antipathy to those who try to approach it, refusing to trust anyone, while keeping to itself.

Offered Anastasia Selina, an animal activist based in Siberia via Central European News: ‘We haven’t been able to get anywhere near the animal,’

Adding: ‘It only seems to want to get to its previous owner and as far as we know, they didn’t survive the car accident.’

Incredulously the Siberian husky, thought to be a mongrel is believed to have stood in the same spot since the 2014 car crash in the hope of finding its owner, refusing to be allowed to be captured.

Reiterated the dog activist: ‘It doesn’t trust anyone else and will not even let anybody else stroke it.’

A post via express.co.uk tells of locals in the nearby village of Berkut, near the town of Yalutorovsk in south-central Russia’s Tyumen Oblast region, leaving food out for the devastated dog and even set up a kennel near the side of the road.

A truck driving past destroyed the cage, but it was rebuilt by community members a few weeks later.

Despite the cold weather this year, the dog has survived a second Siberian winter, thanks to motorists throwing food out of the window, as a campaign has now begun in a bid to find a home for the dog and to capture him once and for all. 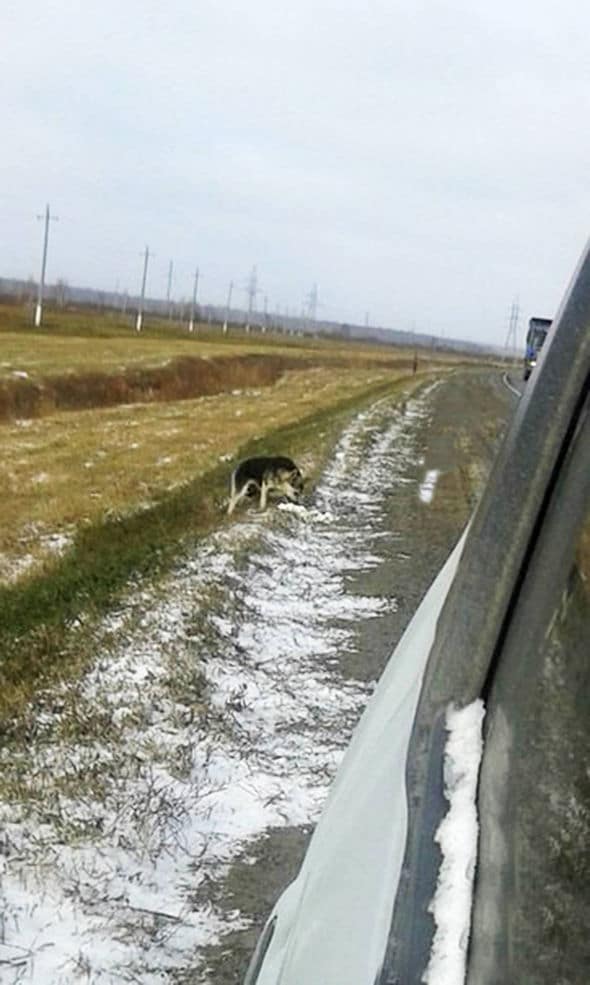