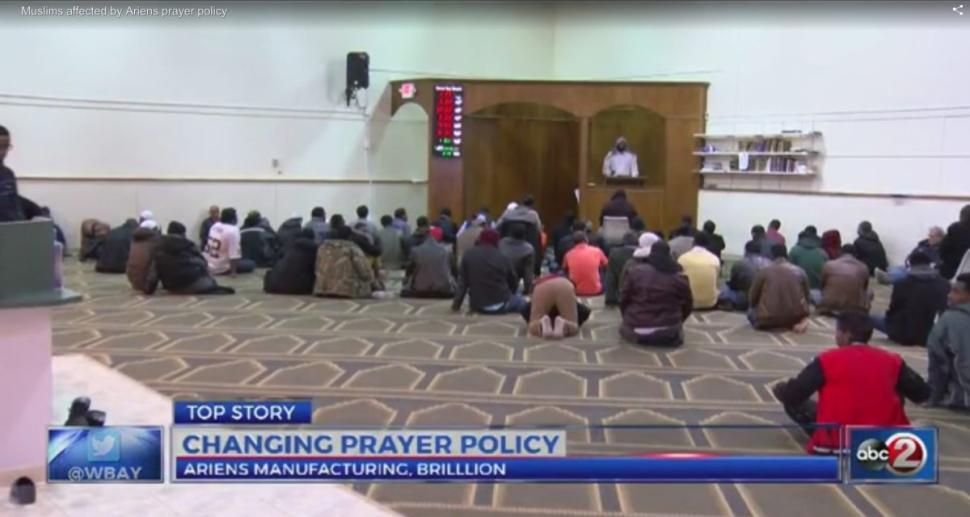 Ariens Company, a Brillion based Wisconsin power plant manufacturing factory has caused disconcert after enacting a new policy in which it has told it will fire employees if they take two five minute daily breaks in order to pray.

The policy is understood to have affected up to 53 Muslim workers, with ten employees already indicating that they wish to stay in their current position while the rest have either chosen to leave or are planning to leave.

Until the new policy was set into motion on Thursday, employees were allowed to leave the production line twice a shift to pray.

Responding to its change in policy, a company rep told via WBAY-TV the ‘manufacturing environment does not allow for unscheduled breaks in production.’

News of the policy led to the Council on American-Islamic Relations (CAIR National) on Saturday calling on Ariens to allow Muslim workers to pray at work using the previous policy until a resolution to the dispute was found.

That said, Muslim workers have told it is not in the Muslim tradition to pray during meal times.

Offered Green Bay Masjid Imam Hasan Abdi: ‘If someone tells you, “You pray on your break,” and the break time is not the prayer time? It will be impossible to pray,’

Workers who have bucked the new policy have already been fired after choosing to pray during their usual time.

Told one sacked employee, Ibrahim Mehemmed: ‘We pray by the time. So they say, “If you don’t pray at the break time,” they give us this [unemployment] paper to just leave.’

Countered another employee, Adan Hurr: ‘I have been 35 years in America and I’ve never heard of a company that is not allowing its employees to pray five minutes. It is absolutely discrimination on its face,’

‘Allow me to pray so that I can go back to work and do what I love to do, which is working for Ariens. But we are not allowed to do that. Yesterday what happened was just a travesty’.

A spokesperson for the company said that they met with Somalian employees in order to suit their needs.

The company ‘put a considerable amount of effort into finding a solution that allows for employees of Muslim faith to pray during work hours.’

Adding in a released statement: ‘We met with members of our Somalian employee group to better understand their needs and consulted with local representatives of Muslim faith’.

A law written by the Equal Opportunity Employment Commission says that the company does not have the right to tamper with employees’ beliefs.

‘An employer does not have to accommodate an employee’s religious beliefs or practices if doing so would cause undue hardship to the employer… [such as] decreased efficiency.’

I do believe Ariens is partly at fault here, what other manufacturing company has a rule that allows employees to leave their production line twice a day so that they can pray? The question is, why now and why have this rule to begin with?

Why can’t Jewish people get Hanukkah off and work Christmas? Because companies are biased in favor of Christianity.

There is a need for practical and reasonable accommodations for everyone. I would not be comfortable if an airline pilot or train engineer insisted upon a religious accommodation such as this during the course of their work and responsibility. This case does not appear to meet that criteria as an accommodation was previously in place and seemingly changed without explanation or discussion.