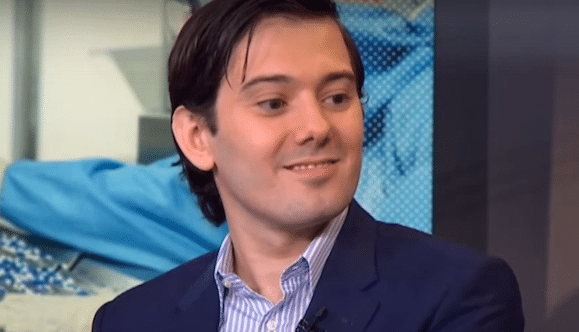 Re entering the tabloid sweepstakes is the disparaging visage of infamous drug CEO, Martin Shkreli who was arrested Thursday morning on charges of security fraud after being found to be running a Ponzi scheme in order to service outstanding personal million dollar debts.

According to Bloomberg, the Turing Pharmaceuticals CEO’s arrest stems from the 32 year old’s time as the head of the biotechnology firm Retrophin, where the executive stands accused of illicitly taking stock from the company to pay off debts.

The exec’s ‘suspect’ actions led to the company’s board firing Shkreli back in 2012, calling him at the time the equivalent of that of a ‘paradigm faithless servant.’ A claim that perhaps fits well with the exec’s controversial behavior earlier this summer when Shkreli acquired a decades-old niche drug, Daraprim used to treat illnesses connected with HIV and cancer, and almost overnight jacked the price of a single pill from $13.50 to $5000.

According to the financialtimes, Shkreli’s arrest comes after the culmination of a 3 year plus investigation at the hands of the SEC who purportedly ran a ‘complicated shell game after Shkreli’s defunct hedge fund, MSMB Capital Management, lost millions.’ A shell game that tantamount to an elaborate ‘ponzi-like scheme.‘

Investigations into Shkreli began after the then hedge fund manager’s backers, MSMB Healthcare and MSMB Capital demanded their money back after claiming the financier had used the proceeds of stock sales of Retrophin which the financier had acquired with their funds to pay off personal and other business debts along with paying himself over the top lucrative management fees.

Told United States Attorney Robert L. Capers of the Eastern District of New York in a late morning press conference: ‘Martin Shkreli engaged in multiple schemes to ensnare investors through a web of lies and deceit,’

‘His plots were matched only by efforts to conceal the fraud, which led him to operate his companies, including a publicly traded company, as a Ponzi scheme, where he used the assets of the new entity to pay off debts of the old entity.

‘When regulators and auditors questioned Shkreli’s decisions, he joined forces with Evan Greebel, who used his law license and training to conceal and further the scheme.’

Also arrested Thursday for his role in the scheme was Shkreli’s attorney, Evan Greebel.

While most executives would have been ashen faced and sought anonymity after the summer’s 5000% price hike, Shkreli instead went on to openly taunt his detractors before finding himself the scourge of consumers, politicians calling to rein in the avarice inherent in the pricing behavior of the pharmaceutical industry along with the contempt of health and pharmacy execs who now feared the unwanted spotlight.

Eventually Shkreli backed down and promised to re evaluate the price hike ( a downwards revision has yet to materialize) but not before the financier conceded conceded earlier this month if he could relive that moment, he ‘would have raised prices higher.’

Adding: ‘My shareholders expect me to make the most profit. That’s the ugly, dirty truth.’

Perhaps not surprisingly, Turing Pharmaceuticals a privately held company which KaloBios, a biotech firm that Shkreli took over this year, saw its stocks tank this morning. Along with the future of that of its former executive, Martin Shkreli who may have chewed off more than he could have ever hoped to have swallowed.

Shkreli faces a maximum sentence of 20 years in prison if convicted on all security fraud charges filed against him. Bliss to certain quarters of the community no doubt ….

On the season finale of “Flip That Drug” pic.twitter.com/8DhIkGAGhx

@MartinShkreli has just been arrested by the FBI yall. Its the most wonderful time of the year!!!!!!!!!!!!!