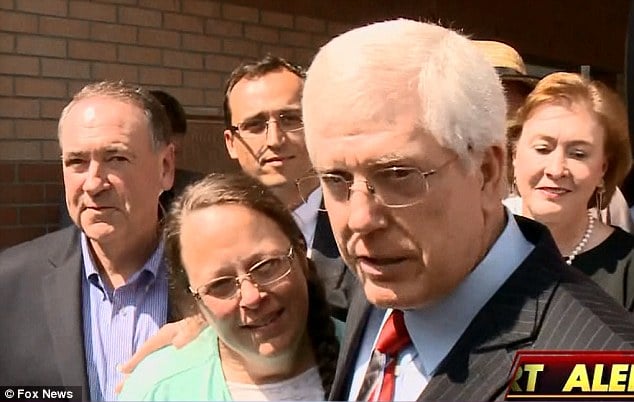 Supporters of Kentucky gay marriage clerk Kim Davis turned up at a rally Tuesday afternoon after Federal Judge David Bunning today freed the woman after sentencing her to jail for failing to issue gay marriage licenses.

The decision to imprison Davis late last week came after the elected official had argued that her faith prohibited her from issuing the licenses and that a recent Supreme court law legalizing gay marriages conflicted with her right to not to act on good conscience and her belief that gay marriage is unethical and not coinciding with her religious beliefs.

Prior to last week’s sentencing, the $80K a year clerk insisted she did not have a problem with gay people getting married ‘as long as my names are not affixed to the documents’.

Complicating matters is the fact that Davis took an oath to obey Kentucky state law, which only upholds legal marriage is between heterosexual marriage, thus setting up the conundrum whether the Supreme Court can make laws as opposed to enforce laws along with the powers of the federal lawmakers and that of state authorities.

In making last week’s decision to incarcerate Davis, who legally can not be fired but only impeached, Judge Bunning held that Davis’ role as county clerk and the requirements of that office mandated she fulfill her oath as a public servant ahead of her personal beliefs. In essence setting up a debate as to whether federal laws trump state laws and whether government laws ought to always take precedence over one’s own personal conscience or regard of said laws?

As part of the his ruling, U.S. District Judge David Bunning warned that Davis could not continue to stop legally-eligible couples from receiving licenses.

Joined by GOP Presidential hopeful, Mike Huckabee outside the Cater County Detention Center, a tearful Davis gave thanks to her supporters and intimated that she intended to return to work.

‘We serve a living god who knows where each and every one of us is at. Just keep on pressing. Don’t let down because he is here and he is worthy, he is worthy,’

Asked for comment, Huckabee said that Davis was simply exercising her religious freedoms, telling the dailymail: ‘That he would continue to tell people to do what the law says and what their conscience says. Courts don’t make law.’

Speaking in front of supporters, Huckabee who said he willing to go to jail in Davis’ place added: ‘We stand with Kim today,’

‘We cannot criminalize the Christian faith.’

As Davis took to the stage, Christian supporters of the county clerk cheered, whilst some wept, with one woman, Rebecca Finley, a Pentecostal Christian from Clay County telling: ‘This is my life, my salvation, fending for my Christian liberty,’

‘I’m here to stand up for God and Kim Davis.’

Addressing supporters, Davis’ attorney, Mat Staver said Davis was loyal to God and her job, adding that his client won’t violate her conscience and argues that the licenses issued by her office in her absence are invalid.

Near the end of the news conference outside the jail, Davis was asked: ‘Was it worth it?’ She smiled and nodded yes

Davis’ attorneys had argued that licenses without her signature that were issued while she as in custody were invalid, but the judge disagreed.

Asked if his client intended to interfere with her deputy clerks issuing marriage licenses to all couples, Staver declined to answer media queries.

I wonder if she tries to fire any clerk who issues a license for a gay couple? In which case, this starts being a major headache for the county as it starts having to fend off a wrongful termination suit because of this bitch.

I think this was the judge’s best option. If she stays in jail, she increasingly becomes a martyr. If she were fined, the zealots would have paid the fines. Since they can’t fire her, put her back to work, but don’t let her interfere with issuing marriage licenses. It lets the air out of her inflated crusade. If she does, she’s doing more than simply professing her “faith” (whatever contradictory BS it is), she’s preventing others from doing their jobs and even imposing her faith on others. She was doing it before, but now a spotlight will be shined upon her if she does it again.

Good for Judge Bunning. This was quickly becoming the Kim Davis Martyrdom Show, which distracts from the central issue, which is serving the citizens of Rowan County. If that’s getting done, then that’s all that really matters.

Always remember that the real victims in this story were the couples in Rowan County denied their due process under the law.

theres a reason we have a division between church and state, so these trolls don’t hijack our country. if she won’t do the job, fire her. who does she think she is?