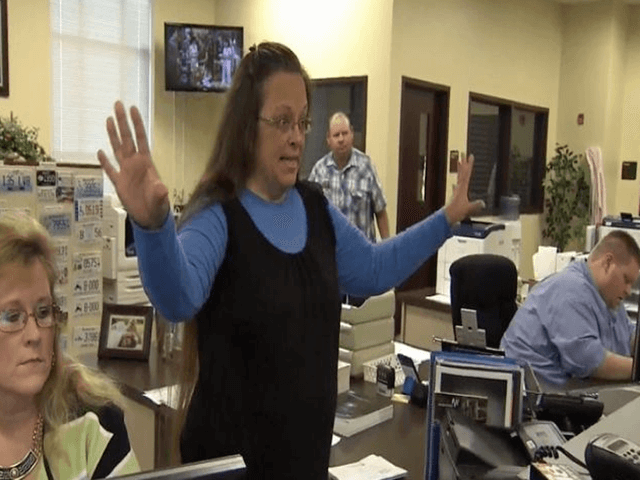 Discord has come to the fore with a federal judge in Kentucky today ordering a defiant Rowan County clerk, Kim Davis to be jailed after the woman repeatedly refused to issue marriage certificates to gay couples.

The jailing comes after US District Judge David Bunning told Davis she faced incarceration until she complied with an order to resume issuing licenses despite the clerk’s defiance. In making his decision, Bunning held forcing the woman to jail was his only alternative as he did not believe Davis would comply with his order even if she were fined.

The ruling comes as an elected official, Davis can’t be fired, only impeached by the legislature. The clerk also has the right to rescind her office, but to date has declined to tender her resignation as she clings to her personal beliefs that gay marriage is unethical and not coinciding with her religious beliefs.

In making his decision, Judge Bunning held that Davis’ role as county clerk and the requirements of that office mandated she fulfill her oath as a public servant ahead of her personal beliefs.

Told the judge: ‘Her good faith is simply not a viable defense.’

Judge said fine for Kim Davis would not work b/c others apparently raising money to pay fines for her. ^JC

Judge Bunning told Kim Davis he has his own religious beliefs as Catholic, but public officials must respect the law. ^JC
— Bluegrass Politics (@BGPolitics) September 3, 2015

The court’s decision this afternoon led to gay marriage supporters who had congregated outside the courthouse celebrating the judgement, chanting, ‘Love won’, and ‘love is not a sin.’

That said, supporters of Davis had also come, with one protester arguing, ‘Don’t make a moral wrong, a civil right.’

‘She’s just standing up for her God, which as Christians we need to do.’

Reiterated Kim Davis’ husband, Joe Davis: ‘They want us to accept their beliefs and their ways. But they won’t accept our beliefs and our ways.’

Today’s ruling comes after Davis, who is Apostolic Christian, stopped issuing licenses to all couples in June after the U.S. Supreme Court legalized gay marriage. Despite rulings against her, the clerk continued turning away couples, insisting she was doing so ‘under God’s authority.’

The couples who originally sued in the case have asked US District Judge David Bunning to punish Davis with fines but not jail time.

Bunning in August ruled for the couples, finding that Davis had to live up to her official duties as a county clerk despite her religious beliefs.

The clerk finally broke her silence Tuesday, saying in a statement that despite calls for her to step down, she has done her job in Rowan County well.

In standing her ground, Davis has adamantly held that the issuing of marriage licenses to gay couples is not a ‘gay or lesbian issue,’ but rather a First Amendment issue concerning her religious liberty.

Asserted the marriage clerk: ‘To issue a marriage license which conflicts with God’s definition of marriage, with my name affixed to the certificate, would violate my conscience.’

The deeply devout Christian also shed some light on her religious beliefs, saying she owes her life to Jesus Christ.

‘Following the death of my godly mother-in-law over four years ago, I went to church to fulfill her dying wish. There I heard a message of grace and forgiveness and surrendered my life to Jesus Christ,’ Davis’ statement read.

At present it is not necessarily understood if Kentucky lawmakers will choose to impeach Davis and why for that matter they have declined to force her out of office, which some wonder has given Davis the courage to continue her ‘religious’ crusade …?