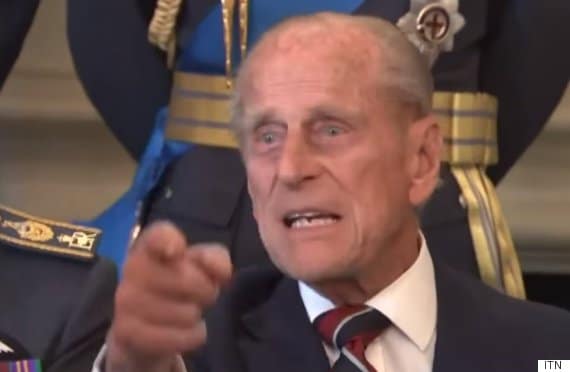 He’s not a prince for nothing it seems after all. Mouths were left wagging after the UK’s Prince Philip came to lose his cool Friday afternoon during a 75 year Battle of Britain commemoration when the the Duke of Edinburgh told a photographer, ‘Just take the fxcking picture.’

The outburst from the historically gaffe prone royal came whilst he was waiting to have his picture taken among a group of assembled RAF vets and distinguished guests, including grandson, Prince William when Prince Philip snapped as he appeared to lose his patience as a photographer darted into the seating arrangement, presumably in search of the perfect shot. Needless to say he got it.

The expletive would be met with laughter from the posing guests, including Prince William who smiled sheepishly whilst uttering, ‘how’s those key words?’

Known for his colorful outbursts and gaffes in public, Prince Philip has had previous encounters which came to raise eyebrows, including one instance in 1997 when he snapped at a car par attendant who failed to recognize him, ‘you bloody silly fool.’

In one of his most infamous gaffes in 1986, the Duke told a group of British students they would become ‘slitty-eyed’ if they stayed in China much longer.

The image of the Prince Philip pointing his finger at the photographer and telling him off has since elicited a myriad of reaction, with some wondering if the Prince has gotten a bit too ahead of himself and if he should learn to be more humble, especially in relation to staff and workers, whilst others have regarded the royal’s losing his cool as par for the course and endemic of the privileges that royals have taken too much for granted.

What do you think did Prince Philip go too far or are these just the perks of being a self entitled royal or does being royal have nothing to do with a 94 year old man simply losing his cool at the end of a long hot summer day’s engagements?

Prince Philip swears at RAF vets photo op http://t.co/OcC20pk78J poor lamb, got some important being useless to do somewhere?

Prince Philip swears at "dithering" snapper. One was doing a job properly, the other taking advantage of a privileged position…you decide

"A no nonsense man- he doesn't pretend to be the 'royal good' -what you see is what u get (true Philip)-I like him http://t.co/NxqxQjYkaN

Prince Philip swears, how funny. Best I can say is that he wouldn't be first if I had to choose an order to punch the royals in the face

For the record, I don't give a fuck if Prince Philip swears on camera. Or if he lives or dies, for that matter

Prince Philip swears during photocall, he is virtually senile, and what are those medals on Edwards uniform !!!!!!!!! http://t.co/A55TKJ2Rme