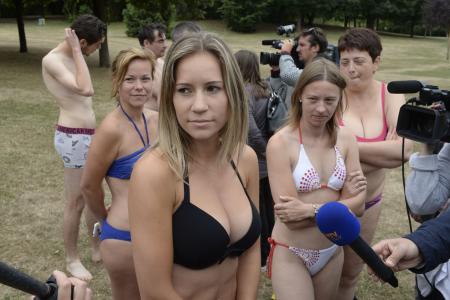 Angelique Sloss a 21 year old French woman has been beaten up by a gang of Muslim women after she was observed to be sunbathing in a bikini in public park, Parc Léo Lagrange in the northern French city of Reims.

According to a report via France’s lunion, the woman was sunbathing with friends last Wednesday when she was reportedly beat up by a gang of Muslim women, aged between 16 and 24.

The beating led to protesters wearing bikinis and swimsuits staging a rally at the park yesterday despite rain and cold winds.

Hundreds across France joined the campaign on Twitter, encouraged by anti-racist organization SOS Racisme in posting photos of themselves wearing swimsuits in public places under the hashtag, #jeportemonmaillotauParcLeo, meaning ‘I wear my swimsuit in the park’.

Responded one Twitter user: ‘All women are free to wear what they want, and no one can decide for them.’

Another wrote: ‘I’m posting a photo to say no to the draconian oppression of liberty.’

All five women were arrested after the attack, with the eldest three, Ines Nouri, Zohra Karim and Hadoune Tadjouri – set to appear in court in September.

The 16-year-old and 17-year-old involved in the attack remain anonymous.

The attack has led to presumptions that the attack was religiously-motivated, and the incident is being held up by right-wing observers as proof that radical Islamic ideas pose a threat to French values.

Nevertheless police have said they have yet to be able to confirm whether the attack was motivated by ‘religious opinions’.

Responding to the fracas, the Mayor of Reims, Arnaud Robinet said: ‘We have to be very careful not to jump to conclusions. All the same, I can understand why people have assumed that this attack had religious motives. If that turns out to be the case, it is a very serious incident.’

One of the group is reported to have shouted at the woman for ‘immorally’ exposing so much flesh in public.

The woman responded and the group attacked her, slapping and punching her.

Passersby managed to stop the assault, nevertheless the battered sunbather has yet been able to go return to work as a result of severe bruising incurred.

So wearing a Bikini is considered highly immoral but beating someone up is just fine?! ? #jeportemonmaillotauParcLeo — ♥Tina Patel♥ (@Tina1807) July 27, 2015

The attack comes amidst continuing animosity between French nationals and Islamic groups, with one poll taken 4 years ago courtesy of France’s Le Monde Journal asserting that Islam is considered a ‘threat’ by many French and Germans to their national identity.

The poll of 1,600 people in both countries found that Muslims have ‘not integrated properly’.

Le Monde ran the results under a headline which brands efforts to get different religious communities to live side by side as a ‘failure’.

France, with 7million, and Germany, 4.3million, have the largest Muslim communities in Europe. There are around 2.4million in Britain.

According to the Le Monde poll, carried out with marketing firm IFOP, 68 per cent of French and 75 per cent of Germans believe Muslims are ‘not well integrated into society’.

Others – 55 per cent in France and 49 per cent in Germany – said they believed the ‘influence and visibility of Islam’ was ‘too large’, while 60 per cent in both countries said the reason for the problem is Muslims’ own ‘refusal’ to integrate.

Just as crucially, 42 per cent of French and 40 per cent of Germans consider the presence of Islamic communities ‘a threat’ to their national identities.

In France the government has displayed a hard line towards religious extremism and has banned Islamic veils.